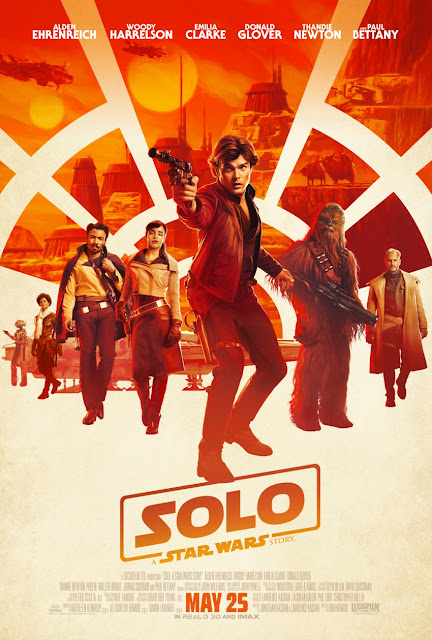 ABOUT THE MOVIE:
Board the Millennium Falcon and journey to a galaxy far, far away in SOLO: A STAR WARS STORY, an all-new adventure with the most beloved scoundrel in the galaxy. Through a series of daring escapades deep within a dark and dangerous criminal underworld, Han Solo befriends his mighty future copilot Chewbacca and meets the notorious gambler Lando Calrissian, in a journey that will set the course of one of the Star Wars saga’s most unlikely heroes. The film stars Alden Ehrenreich, Woody Harrelson, Emilia Clarke, Donald Glover, Thandie Newton, Phoebe Waller-Bridge and Paul Bettany.

My Thoughts:
Ron Howard is the director! Han is awesome! The woman who plays Qi'ra is a GREAT actress! Lando is pretty good, his droid sidekick is voiced by Phoebe Waller-Bridge, and she's awesome! This droid has tons of personality and sometimes even, steals the show! The Millennium Falcon is so cool! It was really cool finding out how Han Solo won it!

My almost six and nine year old daughters were bored. My six year old stayed awake but she kept messing around in her seat. My almost nine year old went to sleep. She wasn't really tired, so much as the movie was boring to her and long. It was over two hours, which is fine for adults, but not for kiddos nine or younger. I feel that boys and girls ages 10 and up will like this movie if they like Star Wars, Chewbacca and Han Solo! But, every child is different, so heaven knows if your kiddos will be like mine, or if they might just LOVE it!

Don't go to this movie expecting a normal Star Wars movie. Because this is similar, but yet, different. It also tells about how the rebellion got started, not just about Han Solo, Lando, Chewy and the Falcon. Overall, this is a great movie, no nudity, no bad language!

For 5 Reasons Why You Should See SOLO: A Star Wars Story, some awesome coloring and activity pages, click on think link: https://christyscozycorners.com/2018/05/5-reasons-see-solo-star-wars-story/