The animated family adventure The Ladybug arrives on DVD, Digital, and On Demand November 20 from Lionsgate. 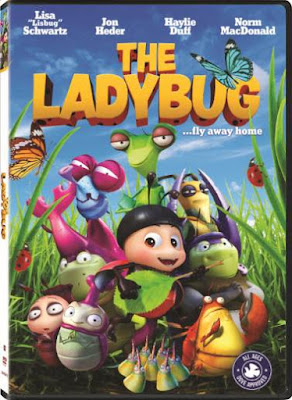 Awarded the Dove Seal of Approval for all ages, The Ladybug is an un-bee-lievably heartwarming film about courage and perseverance featuring the voice talents of YouTube star Lisa “Lisbug” Schwartz, Teen Choice Award winner Haylie Duff, Jon Heder, and Norm MacDonald. The Ladybug DVD includes the featurette “Giving the Characters a Voice: At the Recording Studio with Lisa ‘Lisbug’ Schwartz, Jon Heder, Haylie Duff, and Norm MacDonald,” and will be available for the suggested retail price of $19.98.

This would be great to include in your little girl's Christmas Eve Pajama Box!!!

OFFICIAL SYNOPSIS
In this adorable family adventure, YouTube star Lisa Schwartz plays a plucky ladybug named Ruby. Longing for the beauty and freedom of Golden Canyon, she escapes her laboratory cage and joins forces with Master Dan, a crafty dragonfly. With help from a hungry frog king, an artistic earwig, and a stinky dung beetle, they make their way to this magical land.

Check out the Trailer Below: