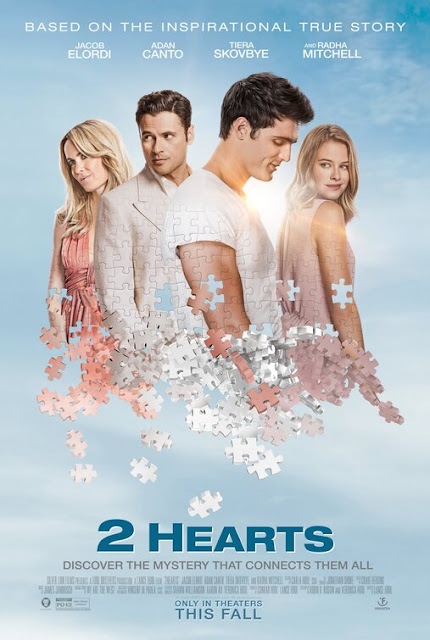 About the movie:
For two couples the future unfolds in different decades and different places, but a hidden connection will bring them together in a way no one could have predicted. Based on an inspirational true story, 2 HEARTS is a romantic journey that celebrates life, love and generosity of spirit, and will strengthen our belief that miracles still happen.


Connect with the "2 Hearts" Film on Social Media:
Website: http://2heartsthefilm.com/


My thoughts and review:
Two great love stories, one great movie! In the middle of playing games with his girlfriend, Sam, and his brother, Chris becomes unconscious and is taken to the hospital. They tell them that he has a brain bleed some place that caused him to not be able to wake up. Less than 2% of the population have this happen to them. While Chris was dating Sam, he got his driver's license and decided to be an organ donor. Chris saves five lives by donating.

I'm an organ donor, are you?

Posted by Heather Kelly at 5:00 AM