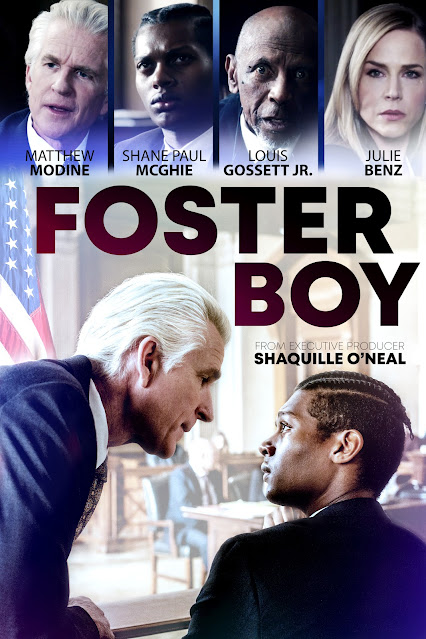 Foster Boy has a HUGE, familiar cast! A nineteen year old young man name Jamal is in jail and has a civil suit pending against the company, Belcore Family Services, that kept placing him in different foster homes where he was abused and more. His social worker wouldn't listen to Jamal's cry for help that he was being raped and beat by older boy who was placed in the foster home when Jamal was ten. This older boy raped Jamal from the time he was ten, until he was thirteen years old. Jamal didn't tell his foster parents at the time because he was so scared.

An older white, corporate lawyer gets assigned to Jamal's case, pro bono, because he's never taken on any pro bono cases before. In Jamal's first foster home, his foster mom beat him and hit him for dumb reasons. In his second foster home, the man of the house used to beat him badly, way worse then his first foster home. Jamal is terrified to talk about what happened to him. He may be a young man, but inside, he's a scared child.

Jamal does learn that if he doesn't face his fears and stand up for himself and for what's right, that his voice and case, won't be heard. Does Jamal win his case, or does he lose? This movie is worth watching for anyone ages fourteen and up. I also feel that all foster children should see this movie, maybe ten years of age and older, as they may be able to relate to the story if they've been in bad foster homes before. This movie might help them to open up and talk about what they've been through.

DIRECTED BY: Youssef Delara (The Bounce Back)

About the movie: Michael Trainer (Matthew Modine) is a high-powered corporate lawyer, estranged from his family and his humanity; Jamal Randolph (Shane Paul McGhie) is an angry young man who has been imprisoned after enduring years of abuse in the corrupt foster care system. If Michael and Jamal can overcome their differences, they may find justice for Jamal and expose the immorality of for-profit foster care. Foster boy also stars Louis Gosset Jr., Julie Benz, Brenda Bakke, Amy Brenneman, Michael Beach, Greg Germann. It is Executive Produced by Shaquille O'Neal.

Posted by Heather Kelly at 4:14 PM