ELSEWHERE - Movie Review! In Theaters and on Demand Today! #Elsewhere 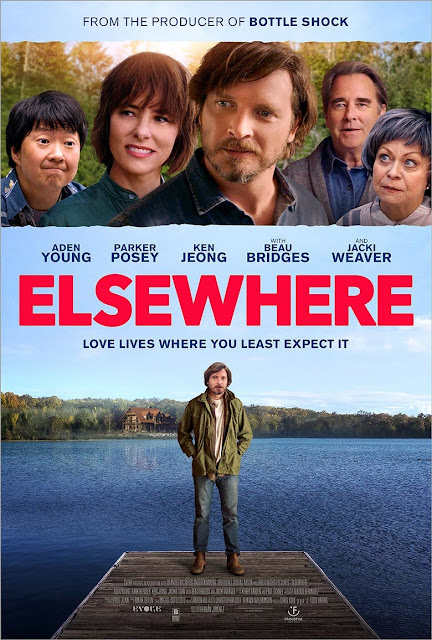 In theaters and on demand Today, JANUARY 24

Still mourning the death of his wife (Munroe), Bruno (Young) is hopelessly attached to the seaside cottage they built together. When he’s evicted by his soulless in-laws, Bruno vows to get it back at any price. Desperate to escape the gracious but neurotic hosting of his parents (Bridges, Weaver), and with the aid of his enabling best friend (Jeong) Bruno sets a risky plan in motion to recover his home. But posing as a handyman for the cottage’s intriguing new tenant (Posey) turns his life - and his intentions - upside down.


My Thoughts and Review:
I couldn't imagine being given some property owned by my in-laws and building a house to live on the land, and then having in spouse die and the in-laws tell you hat you have two weeks to move out of the house and of their land, because they own it an want the property back. Then moving back in with my parents. My goodness. I recently moved from TN to CA, back in with my parents, with my three children. It's been HARD. Especially since I never have asked my parents for help with anything, and then my dad wanted to take half of my income as rent! If I had to do that, and I explained that to him, I'd never be able to afford to move out of their house. We'd be living here more than a year, we'd have to stay 2-3 years in order to save up enough money to move.

Bruno then keeps going back to the only house he ever knew living with his wife, and taking care of the place. After three weeks, he goes back to the house and finds some strange woman inside. Bruno's in-laws blame him for their daughter's death and for her choice to live in the house that Bruno and his wife built together. As they have money and they are wealthy, but they were ashamed of their daughter's choices. The woman who moves into his home wants to hire a contractor to do some work on the house, so Bruno tells her that he's a contractor, and that he'll do the work. He helps her to change the house to her liking.

Bruno goes on a blind date with one of his mom's friends, and ends up sending the girl home in a cab so that he can go talk to the woman, Marie, who moved into his house. They hit it off and have a good time, and she gives him a kiss on the lips goodnight when he drops her off. Bruno and Marie start to fall in love and hang out more and more. Then Bruno is redoing the kitchen, and finds the will that his wife left.

Will Bruno get his house back? What will happen? I guess you'll have to rent "Elsewhere" on demand or see it in a movie theater near you to find out!


Disclosure: I received a private screener for the movie Elsewhere to view at home in exchange for my post. No other compensation was exchanged or received.