Make an ordinary day extraordinary when Disney On Ice presents Let’s Celebrate! Presented by Stonyfield YoKids Organic Yogurt brings more than 50 Disney characters to your hometown for one colossal party on ice! This action-packed, all-new show features a magical montage of celebrations and is set to a blend of contemporary music and favorite Disney songs.

Join Mickey Mouse and Minnie Mouse as they celebrate a Very Merry Unbirthday Party with Alice and the Mad Hatter; Mardi Gras with Princess Tiana and Prince Naveen; a Royal Valentine’s Day Ball with the Disney Princesses; a Hawaiian luau with Lilo & Stitch; a winter wonderland with Woody, Jessie and Buzz Lightyear; a Halloween haunt with the Disney Villains and more in the celebration of the century. Disney On Ice presents Let’s Celebrate!Presented by YoKids will be a memorable and uplifting experience for the whole family!

To discover more about Disney On Ice, go to www.DisneyOnIce.com, or visit us on Facebook and YouTube.

My Review:
Disney On Ice was a lot of fun! The kids really enjoyed seeing Mickey, Minnie, Donald Duck, Pluto, Goofy and more! They also enjoyed seeing their favorite Disney Princesses! Mulan was a huge hit! We also saw Alice in Wonderland and watched Mickey and his friends try to throw a birthday party. I really liked that they showcased Mulan more during this show and there was even a Fan Dance on Ice with Minnie Mouse! It was beautifully done! Overall, this Disney on Ice Show wasn't too long or too short, it was just right! I recommend seeing this one! Disney has outdone themselves on this show! 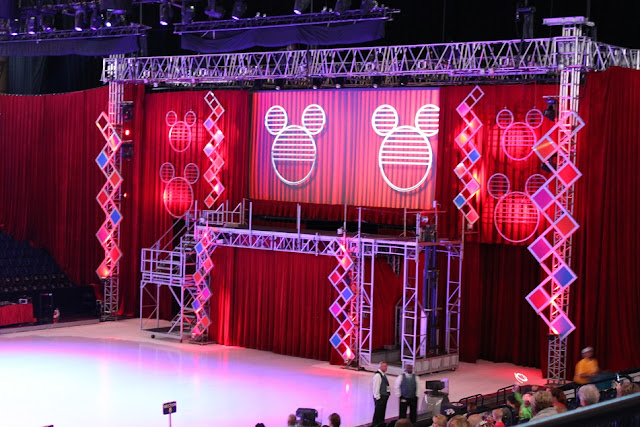 Disney on Ice Stage when we entered the Bridgestone Arena
in Nashville, TN 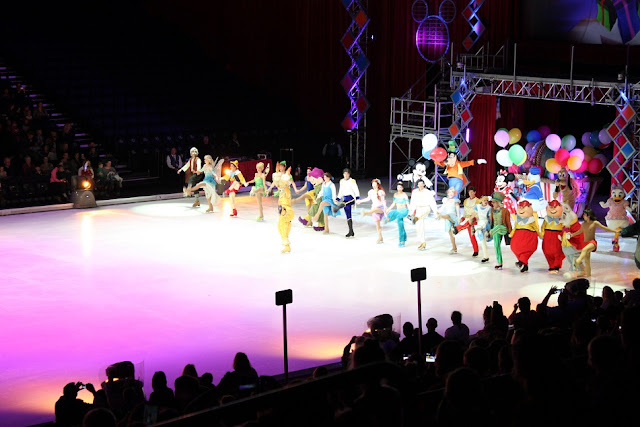 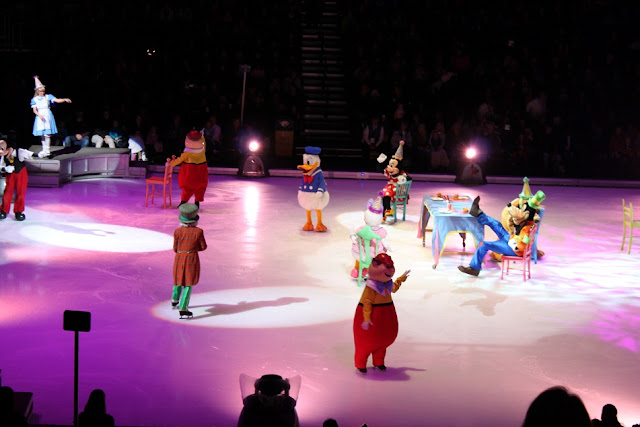 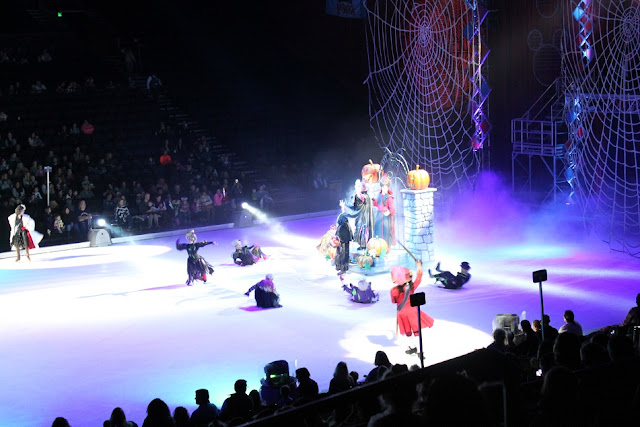 We saw Disney's Villains too! 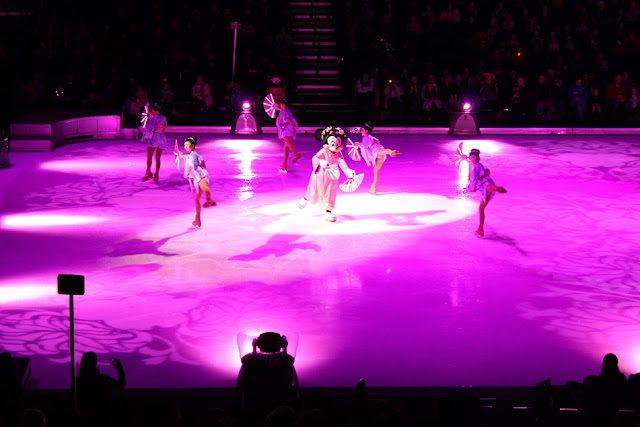 
Disclosure: I received some tickets for the Disney on Ice show from Feld Entertainment in exchange for my post. No other compensation was exchanged or received.

The Purpose Driven Life for Kids - U.S. - Praises of a Wife and Mommy *RC 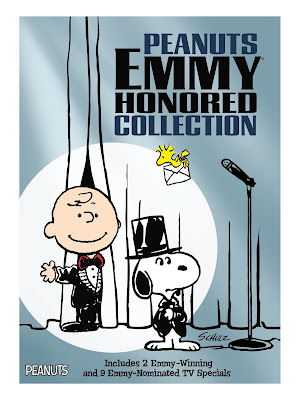 It’s Snoopy and Charlie Brown at their very best with Warner Bros. Home Entertainment’s (WBHE) release of Peanuts: Emmy® Honored Collection, available in stores September 15, 2015. This must-own collection brings together 11 beloved Peanuts specials that have been brilliantly remastered in all-new 4K Ultra HD transfers to DVD. Each of the featured specials has earned an Emmy® Award nomination or won an Emmy® Award. Peanuts: Emmy® Honored Collection will retail for $26.99 SRP.

Take a bow, Charlie Brown! Now fans have a front-row seat to a showcase of the most prestigious Peanuts features ever assembled into one collection. Peanuts: Emmy® Honored Collection includes 11 animated television specials on two discs. All of the specials featured in this release were recognized with either an Emmy® Award win or nomination. All specials have been remastered for gorgeous picture and sound quality. It’s a collection full of big laughs, best friends and life lessons that will delight the whole family.

Featured Specials:
You’re the Greatest, Charlie Brown – Hard work and team spirit is what Charlie Brown needs to win the decathlon at the school Junior Olympics event. His competitors are Marcie, defending Decathlon champ Freddie Fabulous and the Masked Marvel (aka, Snoopy). On the first day, Charlie Brown places third. On day two however, he begins to feel the pressure. He’s faced with having to tackle the high hurdles, pole vault, discus/javelin throw, and other events. Will he emerge victorious and win the Olympics for his school? This special was nominated for a Primetime Emmy® Award (Outstanding Animated Program).

She’s a Good Skate, Charlie Brown – Peppermint Patty trains for a figure-skating competition with Snoopy as her coach. Her determination is fierce, even after facing several obstacles, including exhaustion from pre-dawn training sessions to Marci’s failure to create a proper skating outfit, to her soundtrack malfunctioning at the start of her performance. Will it be disaster on ice or will Peppermint Patty emerge as a champ? This special was nominated for a Primetime Emmy® Award (Outstanding Animated Program).

It’s Magic, Charlie Brown – This special finds Snoopy putting on a show after he checks out a book on magic tricks from the library. With Marcie and Sally as his assistants, he performs many tricks (some that work and some that don’t) before an audience. The grand finale features the biggest trick of all, making Charlie Brown disappear. To everyone’s amazement, Snoopy makes him invisible but doesn’t know how to bring Charlie Brown back. Will Snoopy find a way to reverse the trick? This special was nominated for a Primetime Emmy® Award (Outstanding Animated Program).

Someday You’ll Find Her, Charlie Brown – Charlie Brown is in love – again! He enlists Linus’ help to find a pretty girl he spotted in the crowd at a football game. He is crushed when the game ends because he thinks he’ll never see her again. This special was nominated for two Primetime Emmy® Awards (Outstanding Animated Program/Outstanding Individual Achievement – Animated Programming).

Is this Goodbye, Charlie Brown? – Linus’ father lands a new job which, means the family must relocate. As Linus and Lucy prepare to depart, the Peanuts gang all bid them farewell. Everyone has to cope with the Van Pelts’ departure – some to a greater degree than others. Their absence is felt by all. Charlie Brown is miserable without his pal Linus and Sally too misses her “sweet babboo.” Schroeder regrets not saying a proper “good-bye” to Lucy. Peppermint Patty attempts to cheer up Charlie Brown. How will the gang cope with their pals having left the neighborhood? This special was nominated for a Primetime Emmy® Award (Outstanding Animated Program).

Life is a Circus, Charlie Brown – This special finds Snoopy joining the circus when he falls for one of its performers, a white poodle named Fifi. Snoopy soon becomes a star performer, doing tricks on the unicycle, high wire and trapeze, and he’s renamed “Hugo the Great.” In the meantime, Charlie Brown is left distraught by Snoopy’s decision. What he doesn’t know however, is that for Snoopy, show business isn’t all it’s cracked up to be. Will Snoopy ever return home or will the lure of stardom and his love for Fifi keep him from Charlie Brown? This special earned a Primetime Emmy® Award (Outstanding Animated Program).

What Have We Learned, Charlie Brown? – This touching special finds the Peanuts gang in Europe as they visit various war memorials. They learn about the First and Second World Wars, and the sacrifices made by soldiers at various historical battles. In France they learn about the D-Day Invasion of World War II. Charlie Brown and his pals also visit Ypres and find out about the various battles fought during World War I. Linus recites the famous war poem “In Flanders Fields.” This special was nominated for a Primetime Emmy® Award (Outstanding Animated Program).

Snoopy’s Getting Married, Charlie Brown – Is Snoopy really planning on tying the knot? In this special, everyone in the Peanuts gang pitches in, in an effort to make preparations for Snoopy’s big wedding day. When Snoopy meets the girl of his dreams, Genevieve, a beautiful Poodle, they begin courting and soon after, he proposes. The excitement builds as the big day draws near but Snoopy gets increasingly nervous about leaving his bachelorhood behind. Will wedding bells ring for Snoopy? This special was nominated for a Primetime Emmy® Award (Outstanding Animated Program).

Why, Charlie Brown, Why? – This moving special finds Linus learning how to cope with a very ill classmate, Janice, whom he has grown close to and feels a great deal of affection for. He visits her at the hospital and at school, he defends her from a bully who makes fun of the way she looks. As Janice undergoes treatments to recover her health, Linus questions why she became ill to begin with. This special was nominated for a Primetime Emmy® Award (Outstanding Animated Program).

You’re a Good Sport, Charlie Brown - Start your engines! Its Motocross season and competing against the likes of Peppermint Patty and the Masked Marvel – aka a certain daredevil Beagle named Snoopy – can intimidate anyone. But if Charlie Brown – tagged with unlucky number 13 – can keep the pace slow and steady (as well as hold onto his helmet), he might just win the race! It’s fast and furious fun right up through the finish line with this wonderful Emmy® Award winner (Outstanding Children’s Special).

“Peanuts: Emmy® Honored Collection offers fans the opportunity to own several outstanding Peanuts specials, including childhood favorites to share with a new generation,” said Mary Ellen Thomas, Vice President Family & Animation Marketing. She added, “We’re delighted to release this wonderful collection. This is a must-own title for any Peanuts fan.”


Disclosure: I received a copy of the Peanuts: Emmy® Honored Collection in exchange for my post. No other compensation was exchanged or received.

Posted by Heather Kelly at 5:54 AM 1 comments 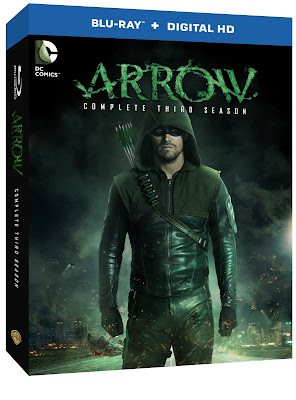 Can Team Arrow Make It Out Alive?

Accept Your Calling and Pick Up The Blu-ray™ & DVD Now Available to Purchase!

Just in time for Arrow’s fourth season on The CW, viewers can catch up with the action-packed series as Warner Bros. Home Entertainment and DC Entertainment release Arrow: The Complete Third Season on Blu-rayTM and DVD. Averaging 4.2 million viewers weekly for each original episode, Arrow is The CW’s #2 show among Total Viewers, behind only The Flash! The release contains all 23 thrilling episodes from the third season that will have you on the edge of your seat, plus almost three hours of extra content, including episode commentaries, featurettes, deleted scenes, and a gag reel.

Oliver Queen’s Arrow has become a hero to the citizens of Starling City – but he will quickly discover that doesn’t mean he can lead a normal life in the spectacular third season of the hit series based on the DC Comics character. A new wave of diabolical masterminds – including the insidious and pervasive havoc wrought by the lethal and secretive League of Assassins – threatens all he holds dear. Team Arrow has grown into a powerful force, but the dangers and secrets that bind them together often put them at odds with each other, as the shadows cast by Malcolm Merlyn and the omnipotent Ra’s al Ghul trigger shifts in loyalties and alliances that test them to their core. For matchless heroism under fire, this action-packed 5-disc, 23-episode Season Three can’t be beaten!

With Blu-ray’s unsurpassed picture and sound, Arrow: The Complete Third Season Blu-ray release will include 1080p Full HD Video with DTS-HD Master Audio for English 5.1. The 4-disc Blu-ray will feature a high-definition Blu-ray and a Digital HD copy of all 23 episodes from Season Three.

Disclosure: I received a copy of Arrow: The Complete Third Season in exchange for my post. No other compensation was exchanged or received.

Posted by Heather Kelly at 5:51 AM 0 comments

Labels: airplanes and dragonflies blog, The Arrow, The Arrow Season 3

$50 GC to Don Roberto Jewelers in the Orange Mall in Orange, CA - Over The Top Mommy

2 tickets to The Clothes Show Live at the NEC Birmingham - U.S. - A Nose For *RC

Okoa Baby Hammock set that includes the Okoa stand, hammock, 2 organic cotton sheets, and one mattress with an innovative Leafspring motion (up to 22 pounds) - US/CAN - inhabitots

Life and Other Near-Death Experiences" by Camille Pagán - book - All 50 U.S. States/CAN - Books I Think You Should Read *GL

My Dream For You is Happiness - children's book - U.S. - The Mommy Factor *RC