'Don McLean’s American Pie: A Fable' To Release on June 7 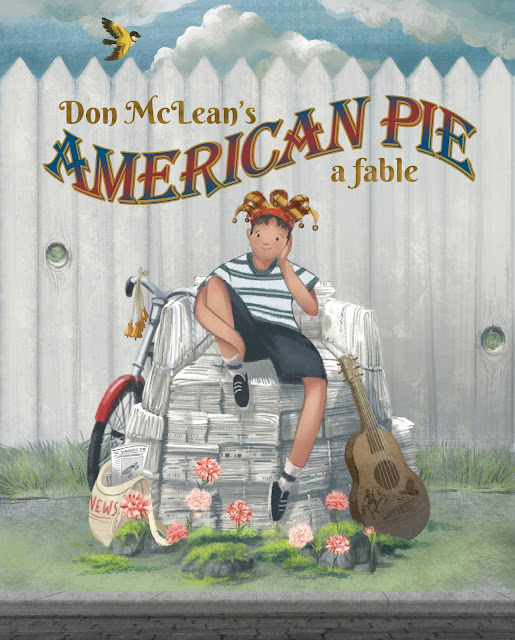 Commemorating the fiftieth anniversary of one of the top songs of the twentieth century, 'Don McLean’s American Pie: A Fable' weaves themes from the iconic song with experiences from McLean’s early life and, like the musical hit that inspired it, offers meaningful elements open to interpretation in a lushly illustrated tale.

“As ‘American Pie’ celebrates 50 years, I'm very happy to have a children’s book based on the premise of the song,” McLean said. “Everyone has a different interpretation of it. Releasing this fable brings another perspective to the lyrics, along with some backstory for when I wrote it. I hope every child gets to imagine in their own mind what ‘American Pie’ means to them and know that dreams can become reality.”

“Don McLean’s American Pie: A Fable” is the story of a newspaper delivery boy in the late 1950s who discovers the joy of friendship and music, eventually learning that when you recognize what makes you happy, you are never truly alone.

The June 7 book release also serves as the launch of IPG Publishing and of a partnership between the Chicago-based publisher and Los Angeles-based media company Meteor 17.

“I’m especially proud that this timely fable is the first release in our partnership with IPG Publishing,” Proffer said. “It echoes the spirit and sentiment of Don’s ‘American Pie’ and will leave the reader contemplating and feeling, just like the song that inspired it. After fifty years, the song maintains its relevance and the book will introduce its magic to a new generation.”

Released in 1971, “American Pie” was named one of the top five songs of the century by the National Endowment for the Arts and the Recording Industry Association of America, and the original recording was selected for preservation in the National Recording Registry by the Library of Congress as being “culturally, historically or artistically significant.” The song is also the subject of an upcoming documentary.

“At its heart, Don McLean’s iconic song was about real events that impacted a generation, and our book is similar in spirit," said Richard T. Williams, Vice President, Business Development, Publishing & Licensing for IPG. “It doesn’t tell the literal story of The Day the Music Died, but it hints at how a young boy may have found inspiration from it, resulting in a lifetime of music and artistry—just as Don may have.”

He added that by pairing an emotionally resonant story with elaborate and whimsical illustrations, the publishing team hoped to inspire children to find their inner creative voices.

Don McLean is a Grammy award honoree, a Songwriter Hall of Fame member, a BBC Lifetime Achievement Award recipient, and his smash hit “American Pie” resides in the Library of Congress National Recording Registry and was named by the Recording Industry of America (RIAA) a top 5 song of the 20th Century. A New York native, Don McLean is one of the most revered and respected songwriters in American history. (www.donmclean.com)

Founded in 1971, IPG was the first organization specifically created for the purpose of marketing titles from independent presses to the book trade. Today, IPG’s wide reach into the book market includes distribution of both print and e-books from a wide array of publishers, digital printing, and traditional publishing. With consistent growth year over year, IPG’s success has come from supporting and encouraging the growth of its publishing partners in the United States and worldwide. IPG was acquired by Chicago Review Press in 1987, and this acquisition formed the parent company Chicago Review Press, Inc., which now owns Chicago-based indie publishers Chicago Review Press and Triumph Books. (www.ipgbook.com)

Spencer Proffer is a highly regarded and innovative music, media producer, and strategist with a long history of connecting with audiences. His productions and those he has been integrally involved with have garnered Academy, Golden Globe, Emmy, Grammy, and Tony awards and nominations. METEOR 17 is a full-service media organization that actively conceives and participates through all phases of deal-making, production, marketing, and distribution. (www.meteor17.com)

*The BIG "No War" yellow and blue picture at the end of my posts, is not mine. I didn't put it there. You can thank google for that!

Acclaimed filmmaker Steven Spielberg presents an inspired reimagining of the beloved musical West Side Story. The film that critics celebrate as “electrifying” (Alonso Duralde, The Wrap) and “a total triumph” (Matt Goldberg, Collider) has been nominated for 7 Academy Awards® including Best Picture, Best Director and Best Supporting Actress and 11 Critics’ Choice Awards. 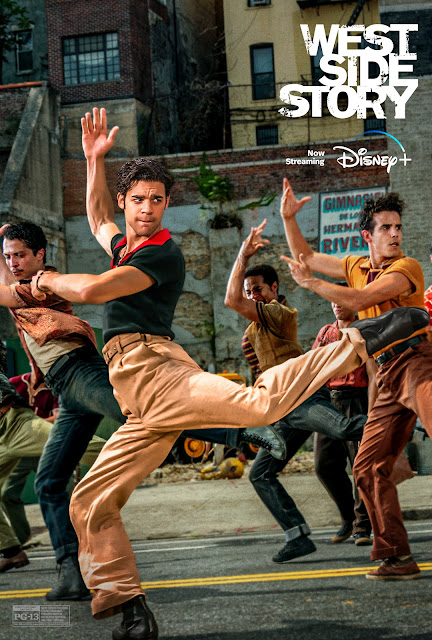 I watched this movie with both of my girls, ages twelve and nine. My nine year old actually paid more attention to the movie then my twelve year old. I remember reading the book and watching the movie in either middle or high school. I have seen it one other time since then, the black and white version. This movie was very well done. I enjoyed it as much as the original, if not more!

Bringing together the best of both Broadway and Hollywood, the film’s creative team includes Kushner, who also served as an executive producer; Tony Award® winner Justin Peck, who choreographed the musical numbers in the film; renowned Los Angeles Philharmonic conductor and GRAMMY Award® winner Gustavo Dudamel, who helmed the recording of the iconic score; Academy Award®-nominated composer and conductor David Newman (“Anastasia”), who arranged the score, Tony Award®-winning composer Jeanine Tesori (“Fun Home,” “Thoroughly Modern Millie”), who supervised the cast on vocals; and GRAMMY®-nominated music supervisor Matt Sullivan (“Beauty and the Beast,” “Chicago”), who serves as executive music producer for the film. The film is produced by Spielberg, p.g.a., Academy Award®-nominated producer Kristie Macosko Krieger, p.g.a. and Tony Award®-winning producer Kevin McCollum. “West Side Story” has been adapted for the screen from the original 1957 Broadway show. Original choreography by Jerome Robbins, based on the stage play, book by Arthur Laurents, music by Leonard Bernstein, lyrics by Stephen Sondheim, play conceived, directed and choreographed by Jerome Robbins, lyrics by Stephen Sondheim, music by Leonard Bernstein.

The Stories of West Side Story

* Opening – Director Steven Spielberg begins the journey of one of his career goals – to direct his own cinematic version of the iconic musical. Doing so means he will embrace enormous challenges.

* Prologue – From the iconic finger snaps to the complex choreography, we are introduced to the film’s opening scene and explore its setting. We begin to see Spielberg's vision take shape.

* Sharks & Jets – Meet the actors who play the Sharks and the Jets. Go behind the scenes of "La Borinqueña," the song of the Puerto Rican Revolution, which was added into this vision of the story. Discover the deeper meaning of “Jet Song.”

* Dance At The Gym – Mambo your way through “The Dance At The Gym” and Justin Peck’s choreography, as it leads to the pivotal moment when Tony and Maria meet for the first time.

* The Romance – Explore the budding romance of Tony and Maria with the songs “Maria” and “Tonight” as Rachel Zegler (Maria) and Ansel Elgort (Tony) talk about the casting process, and what led them to this career-defining film.

* America – During a sweltering New York heat wave, the cast and crew take the production to the streets for one of the biggest dance numbers in the film, "America," featuring Ariana DeBose, who plays Anita.

* Gee, Officer Krupke – Spielberg and the Jets make "Gee, Officer Krupke" their own through a new setting, vocal direction and choreography, while they explore the meaning of Stephen Sondheim’s lyrics. Get to know Iris Menas (Anybodys) and the significance of their role.

* Cool – During the first week of production, Spielberg and the cast nervously jump into filming on the elaborate and challenging set of the musical number "Cool."

* From Quintet to The Rumble – Spielberg and his team navigate the intertwining scenes of “The Quintet” and "The Rumble." Once there, they take a scene that is traditionally stylishly choreographed, and instead bring a more visceral authenticity to the fight between the two gangs.

* I Feel Pretty – Screenwriter Tony Kushner sheds new light on “I Feel Pretty.” We see how, in Spielberg’s film, the beloved song by lyricist Stephen Sondheim is given new vision, as it is set and performed within Gimbel’s department store.

* Somewhere – Hollywood Legend Rita Moreno, who won acclaim for playing Anita in the 1961 film, returns as Valentina, a shopkeeper’s widow, as well as an executive producer. She brings extraordinary experience and emotion to the film and sings the song “Somewhere.”

* Finale – In a moving testament to the talented cast and crew of WEST SIDE STORY, Spielberg reluctantly wraps “one of the best filmmaking experiences” of his career.

* Tribute – The late Stephen Sondheim reflects on his career and experience making WEST SIDE STORY in this dedication to the esteemed lyricist.

* Go directly to your favorite musical numbers from WEST SIDE STORY.

* The Dance At The Gym

* One Hand, One Heart

The West Side Story Original Motion Picture Soundtrack features 21 songs from the film and is available in both standard digital and physical (CD and vinyl) configurations, as well as a digital release in Dolby Atmos Music.

I DO NOT agree with this photo on my site!

I didn't post it there. I don't know why it's at the foot of EVERY Single one of my posts. I will be contacting google. But I didn't put this there! I traced the address in which it's coming from, and it's from google. So they are doing this! NOT okay! I don't speak about politics on my site. Nor do I condone this crap on my site! 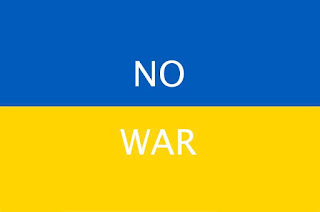 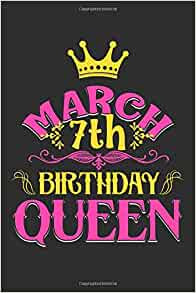 Leave a comment below telling me what you're favorite thing(s) about your birthday is for a chance to win a $20.00 Starbucks, Dunkin Donuts, or a Walmart Gift Card!

For me, it's two months after Christmas. A few weeks after Valentine's Day, and a few weeks or more, before Easter. But this year, it's different. My kids have been ill on and off since January. Last week on Friday, I had two of my kiddos at home, and today, I have one. Both a stomach bug and the regular old flu is going around. My son, now has the flu! All of this, and I'm looking for work too!

I hope you all have a great week! I will pick the WINNER on Friday, March 11th. I can either snail mail you a gift card, or email it to you. Your choice!