Disclosure: I received a digital screener of "Funeral Day" from Random Media in exchange for my post and my review. No other compensation was exchanged or received.

A Darkly Funny Comedy About Living Life to the Fullest 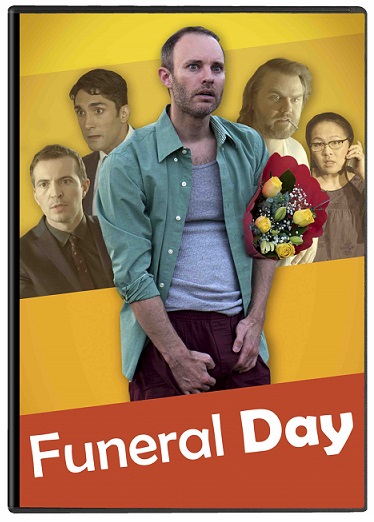 In Due Time Productions and indie film leader Random Media present June 12 national DVD, Digital and VOD release of a dark, quirky and timely new comedy feature, FUNERAL DAY.   It is the story of Scott, a neurotic man, who thinks he found a lump on his testicles and fears he might be dying, so he skips his friend's funeral.  Instead, all in the course of a day, he quits his job; begs for a second chance at love; attempts to look death in the face and of course gets his prostate milked -- all in the name of ‘living life to the fullest.”

Although a comedy, Director/star Jon Weinberg and Screenwriter Kris Elgstrand’s FUNERAL DAY ultimately deals with the serious subjects of mortality and testicular cancer.  In creating the film, Weinberg and Elgstrand were proud to have joined forces with the Testicular Cancer Society (www.TesticularCancerSociety.org) during post production, and continue to work with the organization, to promote education.   It’s their hope that by creating an atmosphere of comedy surrounding the sensitive subject, they might increase awareness of the need to ‘check yourself.’

Best Comedy Feature at the Twister Alley Film Festival (a festival that was included in the
2017 MovieMaker Magazine Top 50) and the Jim Thorpe Independent Film Festival.

Director of Photography: Jeffrey A. Cunningham

Official Synopsis:
Scott thinks he might be dying. Not at all an uncommon thought for Scott, but today the lump he believes he found “down there” might actually be real. Today also happens to be the day of his friend Ken’s funeral who did in fact die of cancer.

When his buddy Chris comes to pick him up for the funeral, Scott refuses to go. Instead, he sets off on a mission to make some “dramatic” changes in his life and he doesn’t have much time because, well, he may be terminal himself. Skipping a friend’s funeral and pissing off a buddy may not be the best way to start his mission, but Scott is nothing if not determined. (Determined to avoid death, doctors, and adult responsibilities, but determined nevertheless).

Along the way he quits his job; begs for a 2nd chance at love; attempts to look death in the face and, of course, gets his prostate milked -- all in the name of changing his life.

Maybe it will all make a difference. Maybe not. But at the very least this day has given him the courage to start taking on some responsibilities... and to get someone qualified to check his nuts.

About Random Media:
Random Media is a content company that acquires and distributes films on a worldwide basis through movie theatres, conventional brick and mortar retailers, digital platforms, cable and satellite companies and television networks. Random Media is known for its commitment to building strong, supportive relationships with its filmmakers. The companies growing library includes such acclaimed films as Fare, Desert Cathedral, The Lonely Italian, Killswitch: The Battle for Control of the Internet, Frank Vs. God, Finding Kim and The Lost City of Cecil B. DeMille.


My Thoughts:
Different kind of movie about a man thinking he's dying. He comes up with so many reasons not to attend his friend's funeral because his friend died of cancer. A friend drives him to the funeral, and he's scared to go. At the end of the movie, he goes to the grave site and lays down some flowers for his friend who passed away, makes plans to go to the doctor, and calls a friend and asks them to go with him.

It's worth your time to see this movie. It can help many people to man up and go see a doctor if they think they found a lump some place. I know from personal experience that making an appt. and keeping it, to find out what the lump could be, is a difficult thing to do.

Funeral Day isn't rated. I'd say rated R because of the adult content in this movie. Not for teens 17 or younger.

Posted by Heather Kelly at 9:38 AM 0 comments

Dorothy and the Wizard of Oz: Emerald City Season One Volume Two - Coming to DVD!

WARNER BROS. HOME ENTERTAINMENT IS SET TO RELEASE
DOROTHY AND THE WIZARD OF OZ:
EMERALD CITY SEASON ONE VOLUME TWO
ON DVD JUNE 12, 2018 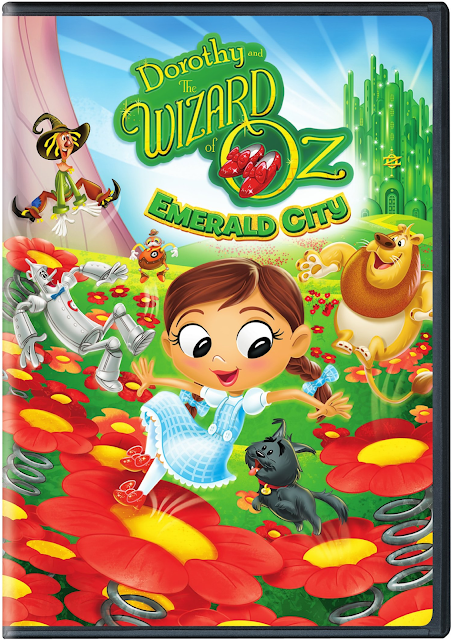 After the Wicked Witch of the West’s defeat, Queen Ozma has appointed Dorothy the Princess of Emerald City. With her feet firmly grounded in her ruby slippers, Dorothy tackles her royal duties with enthusiasm, bravery and farm girl feistiness. And whether it’s magic, munchkins, flying monkeys or her arch-nemesis Wilhelmina, the wicked witch-in-training and niece of the Wicked Witch of the West, Dorothy is ready to track down and put a stop to any problem that comes Oz’s way. Packed with memorable melodies and iconic Oz imagery, Dorothy and the Wizard of Oz is also sure to delight fans of the original books and the classic film The Wizard of Oz.

“Dorothy and the Wizard of Oz is a series that delves into the prolific anthology of the original Oz book series. L. Frank Baum left us with so many wonderful adventures surrounding Dorothy and her friends that go beyond the initial tale. This series puts the spotlight on some of those remarkable stories that we don’t often get exposed to,” said Mary Ellen Thomas, Vice President Family & Animation Marketing. She added, “If you’re a fan of The Wizard of Oz or if just love great storytelling, we think you will enjoy this beautifully animated series.”

Dorothy and the Wizard of Oz: Emerald City Season One Volume Two featured episodes:
1. Jinxed
2. Rise of the Nome King
3. One-Winged Wally
4. Wand-erful
5. No Sleep Sleepover
6. Lion Catches a Bug
7. Tik Tok and Tin Man
8. If I Only Had Some Brawn
9. The Beast Royales
10. Time After Time

Posted by Heather Kelly at 4:30 AM 0 comments

Production Has Begun on "Nancy Drew and the Hidden Staircase" Movie!

ON NANCY DREW AND THE HIDDEN STAIRCASE

CURRENTLY IN PRODUCTION IN GEORGIA 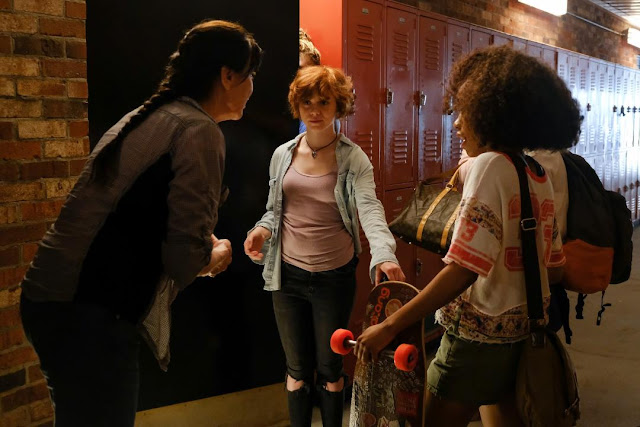 Warner Bros. Home Entertainment, A Very Good Production and Red 56 have begun principal photography on Nancy Drew and the Hidden Staircase, an all-new feature film that returns the American icon to filmed entertainment for the first time in more than a decade. The production is based in Georgia filming at specific locations in and around the city of Monroe.

The film focuses on Nancy Drew (Sophia Lillis, breakout star of It), a smart high schooler with a penchant for keen observation and deduction, who stumbles upon the haunting of a local home. A bit of an outsider struggling to fit into her new surroundings, Nancy and her pals set out to solve the mystery, make new friends and establish their place in the community.

Nancy Drew and the Hidden Staircase is a co-production between Warner Bros. Home Entertainment, Ellen DeGeneres’ A Very Good Production and Red 56.

Award-winning director Katt Shea (Poison Ivy) helms the film from a script by the screenwriting team of Nina Fiore & John Herrera (The Handmaid’s Tale, The Vampire Diaries). Ellen DeGeneres (The Ellen DeGeneres Show), Jeff Kleeman (The Man From U.N.C.L.E.) and Chip Diggins (A Walk In The Woods) are producers. Wendy S. Williams (The Fate Of The Furious) is executive producer.

As the inspiration for Nancy Drew and the Hidden Staircase, Nancy Drew has intrigued and entertained audiences for nearly 90 years in books, comics, films and video games. An icon in American mystery novels, the character initially appeared in 1930, evolving through each incarnation to reflect the look, sensibilities and technologies of the times. Nancy Drew books have sold more than 100 million copies, and have been translated to accommodate young readers across the planet. A number of feature films and television series have featured the character, starting with Nancy Drew … Detective in 1938. The character last appeared on film in the 2007 release, Nancy Drew, which starred Emma Roberts.

No release date has been set for Nancy Drew and the Hidden Staircase.

Posted by Heather Kelly at 9:02 AM 0 comments

The Loud House It Gets Louder DVD - U.S. - In Our Spare Time *RC

Drawn Together, plus a sketchbook and kid-friendly art materials - U.S. - The New Modern Momma*RC 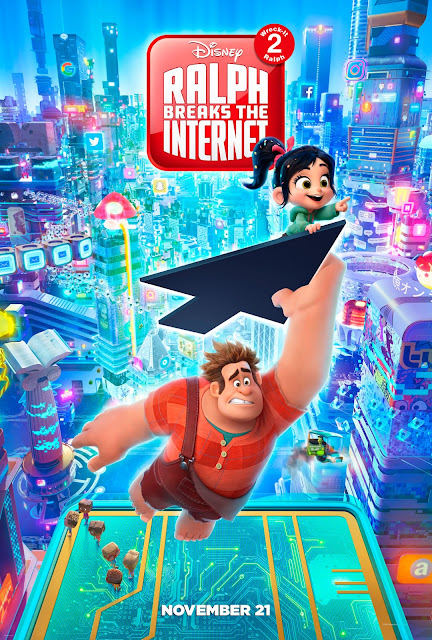 RALPH BREAKS THE INTERNET: WRECK-IT RALPH 2 leaves Litwak’s video arcade behind, venturing into the uncharted, expansive and thrilling world of the internet—which may or may not survive Ralph’s wrecking. Video game bad guy Ralph (voice of John C. Reilly) and fellow misfit Vanellope von Schweetz (voice of Sarah Silverman) must risk it all by traveling to the world wide web in search of a replacement part to save Vanellope’s video game, Sugar Rush. In way over their heads, Ralph and Vanellope rely on the citizens of the internet—the netizens—to help navigate their way, including a webite entrepreneur named Yesss (voice of Taraji P. Henson), who is the head algorithm and the heart and soul of trend-making site “BuzzzTube.”

Get 300 bonus SB when you sign up for Swagbucks in June! 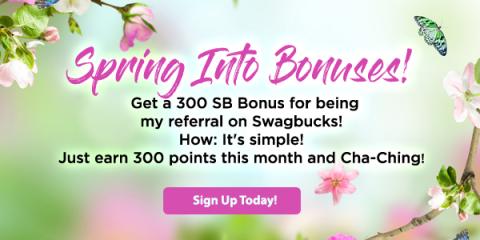 All throughout June you can earn large bonuses when sign up as my referral on Swagbucks. Swagbucks is a rewards site where you earn points (called SB) for things you're probably doing online already, like searching the web, watching videos, shopping, discovering deals, and taking surveys. Then you take those points and exchange them for gift cards to places like Amazon, Target, or PayPal cash.

3. That's it. It's super easy, and Swagbucks is for real. I use it myself, and I've earned enough Swagbucks to help me pay for Birthday Gifts, Christmas Gifts, Gas Gift Cards, Travel and more!

Hardcover copy of "Emergency Contact," by Mary H.K. Choi - All 50 U.S. States - Books I Think You Should Read *GL

Hardcover copy of "Matchmaking for Beginners," by Maddie Dawson (3 winners) - All 50 U.S. States - Books I Think You Should Read *GL

Not Receiving My Emails?

If your not receiving my Emails, please resubscribe!

Or you can re-sign up in the box located on the right sidebar of my site!

*Then go to your Email Address to Confirm your subscription!

As this will help to make your email subscription current, which will make my blog GDPR compliant.

By signing up for my email again, you are giving me consent to process your personal data for for my blog stats, to be able to email you when you win prizes, and for me to email you my newsletter on a daily basis.

Thank you so much!