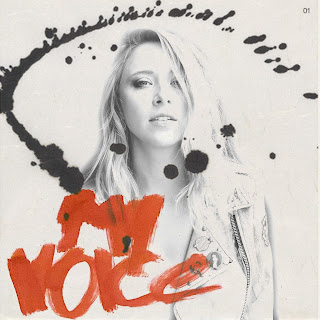 Today, Kalie Shorr is giving fans a glimpse of her personal reflections with the release of “My Voice,” her honest and unabashed tale of her journey as a Nashville singer-songwriter. Still celebrating the success of her debut album Open Book, No. 7 on New York Times’ all-genre Best Albums of 2019 list, Shorr is turning the page to a new chapter with Open Book: Unabridged coming later this year. “My Voice” is just the first page of this new chapter, continuing her truth-filled and authentically irreverent point of view. With sonic influences from her diverse country roots and mid-2000s pop-punk, Kalie Shorr doubles down on her self-assured, rebelliously-unique sound. Listen to “My Voice” here.

Variety recently called her “the most attention-getting DIY artist in country [music],” a trait that recently landed Shorr her first recording contract with New York based major player TMWRK Records.

“I never thought I'd get to release ‘My Voice.’ I wrote it in March of 2019, the week before we started recording Open Book. I was going into the studio with this sense of confidence that I hadn't had before, like I knew that album was going to change my life. I still had plenty of episodes of self-doubt, but writing that song was so cathartic and empowering for me. When it came time to pick songs for the extended version of the album (Open Book: Unabridged), I threw that in the Dropbox not expecting anything. The head of my new label championed it from day one. I'm so happy I get to let people hear my truly unfiltered thoughts on the music business and my career. When I wrote it, it was more of a stream of consciousness musing on the industry and now it's turned into a personal mantra,” says Shorr.

Some of music’s most esteemed critics praised Open Book. Rolling Stone compares the record to a mix of “Shania Twain, Red-era Taylor Swift, Dashboard Confessional and Alanis Morissette,” while Taste of Country calls it “bold,” “raw,” and “real.” As for Shorr, NPR touts the singer/songwriter as “one of Nashville’s most promising” and in the U.K., The Guardian dubbed Shorr “the new queen of country”.

Last month, Shorr launched a podcast in partnership with iHeartMedia called “Too Much To Say with Kalie Shorr,” executive produced by nationally syndicated radio host Bobby Bones. “My Voice” is her first release on TMWRK Records.

According to The New York Times, Kalie Shorr’s debut album - Open Book - was the #7 Best Album of 2019 alongside Taylor Swift, Lana Del Ray and Ariana Grande. Along with a long list of other accolades, Variety called Open Book “2019’s best freshman country effort,” and Stereogum said “country music needs this kind of fire.” Shorr burst onto the Nashville music scene in 2016 with her self-penned hit “Fight Like A Girl” and shortly after, the Portland, Maine singer-songwriter became a SiriusXM “Highway Find” and was spotlighted by Apple Music, Spotify, CMT, Radio Disney Country, Pandora, Taste of Country, The Boot and Billboard magazine. She was named a “CMT Next Women of Country,” “The New Nashville” by Teen Vogue and a “Top 10 Country Artists To Watch In 2018” by the Huffington Post. She made her Grand Ole Opry debut in 2018 and has gone on to play that heralded stage 17 times so far. From her work with the all-female, singer-songwriter collective Song Suffragettes, Shorr has been featured on PBS NewsHour, NPR’s “Morning Edition” and “On Point” as well as in ELLE Magazine. In addition to her iHeartMedia and Bobby Bones-produced podcast called “Too Much to Say with Kalie Shorr,” she is also co-host of the “Let The Girls Play” radio series featured weekly on Radio Disney Country. She rang in 2020 performing for over 200,000 people at Nashville’s largest-ever New Year’s Eve show with Keith Urban, Stevie Nicks, Jason Isbell, The Struts and more. With wide praise for her current album coming from diverse outlets like NPR, Slate, People, No Depression, Rolling Stone and more, Shorr’s 2020 lit up with The Guardian (UK) and The Tennessean calling her an artist to watch this year. She is the most recent signee to New York-based tmwrk records who will be releasing the expanded album Open Book: Unabridged later this year. For more information visit www.kalieshorr.com.

Posted by Heather Kelly at 8:50 AM 0 comments 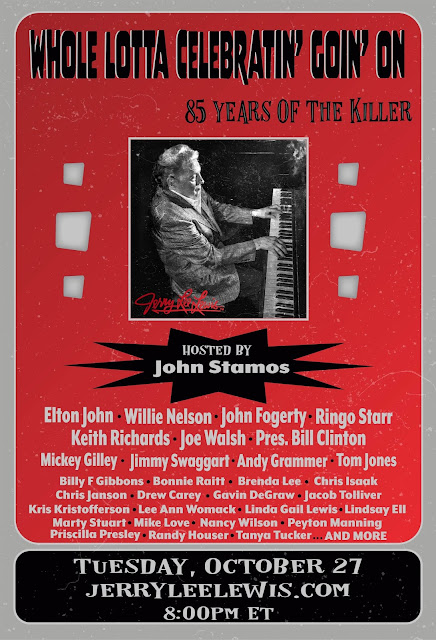 Announced last week, a star-studded event will be held to celebrate Jerry Lee Lewis’ 85th Birthday featuring some of the biggest names in music, movies, sports, television and politics. The virtual livestream, hosted by actor John Stamos, has added Ringo Starr, Keith Richards, John Fogerty, Andy Grammer, Kris Kristofferson, Peyton Manning and more for performances and well wishes for the “Last Man Standing” and founding father of Rock n’ Roll. There will be special appearances from Jerry Lee Lewis himself and he will interact with fans via the live chat.

Whole Lotta Celebratin’ Goin’ On: 85 Years of The Killer will air on October 27 at 8pm ET/7pm CT via Jerry Lee Lewis’ official Facebook and YouTube channels and JerryLeeLewis.com. The event will benefit World Vision, a Christian organization working to help communities lift themselves out of poverty. For good.

Whole Lotta Celebratin’ Goin’ On: 85 Years of The Killer is being produced and directed by Zach Farnum/117 Entertainment in association with Jeff Franklin and Tisha Fein.

Jerry Lee Lewis is one of the all-time best singer-songwriters, musicians and pianists. He was born in 1935 to Mamie and Elmo Lewis of Ferriday, Louisiana. In November of ‘56 Jerry Lee made his way to Memphis, Tennessee where he would join Sun Records and launch hit records with "Crazy Arms," "Whole Lotta Shakin,’", and "Great Balls of Fire." Jerry Lee, along with his friends Johnny Cash, Elvis Presley and Carl Perkins would become known as the Million Dollar Quartet and there is not any part of music that their influences haven't touched. As a member of the Rock and Roll Hall of Fame’s very first class of inductees, “The Killer” holds numerous awards including a star on the Hollywood Walk of Fame, the Recording Academy's Lifetime Achievement Award and countless other honors. He is truly rock n’ roll’s first great wildman, and shows no signs of stopping, touring around the globe and recording new music still today. Visit www.jerryleelewis.com to follow “The Killer.”