Big Little Lies: The Complete Second Season on Blu-Ray, DVD and Digital to Own NOW! #BigLittleLies

Disclosure: I received one copy of Big Little Lies: The Complete Second Season on DVD from Warner Bros. in exchange for my post. No other compensation was exchanged or received. The opinions below are mine and mine alone. 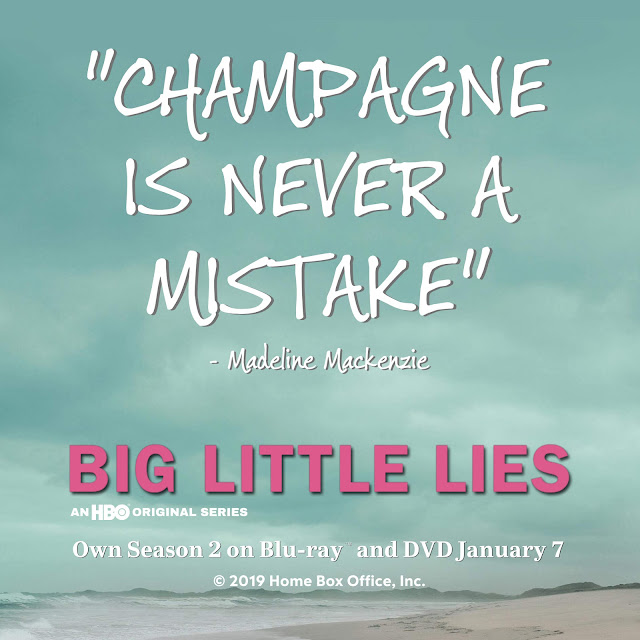 Did You Ever Want It?

Did You Want It Bad?

HBO's smash-hit Big Little Lies returns for more drama, secrets, and seduction then ever before with the release of Big Little Lies: The Complete Second Season on DVD from Warner Bros. Home Entertainment. Iconic actress Meryl Streep joins the all-star cast in season two, along with Reese Witherspoon, Nicole Kidman, Shailene Woodley, Laura Dern and Zoё Kravitz. Fans can purchase the DVD with all 7 exhilarating episodes from the second season and go behind-the-scenes with an all new featurette titled, “The Lies Revealed: A Conversation with the Cast.” Big  Little Lies: The Complete Second Season is priced to own on DVD at $29.98 SRP ($34.99 in Canada), and is also available to own on Digital via purchase from all major digital retailers. Big Little Lies: The Complete Second Season will be available on Blu-ray courtesy of Warner Archive Collection. The Blu-ray release includes all the same content on DVD available now to purchase. Warner Archive Blu-ray releases are found at wb.com/warnerarchive and your favorite online retailer. Fall in love with the “Monterey Five” again and again, as you relive the whole series, with the Big Little Lies Season 1 and 2 twin-pack.

In season two, on the surface, everything seems the same in the seaside town of Monterey, CA: mothers continue to dote, husbands support, children are adorable, houses are beautiful. But the night of the school fundraiser changed all that, leaving the community reeling as the "Monterey Five" bond together to pick up the pieces of their shattered lives. Meanwhile, Perry's grieving mother Mary Louise Wright (Streep) comes to town in search of answers after son's death. “With an all-star cast of this caliber, along with the plot twists and reveals in Season 2, you will be glued to the screen on the edge of your seat until the very end of the season,”said Rosemary Markson, WBHE Senior Vice  President, Television Marketing. “Like and ocean wave that comes and goes so quickly–so will these DVD's off the shelves–so get your orders in today! ”Big Little Liesisa critical and awards success, garnering 16 Emmy® nominations and eight wins, including Limited  Series, Lead Actress in a Limited Series or Movie (Kidman), and Supporting Actress in a Limited Series or Movie (Dern). The series also garnered four Golden Globes®, including acting wins for Kidman and Dern.


My Review and Thoughts:
I have wanted to see this show, but I didn't know that I could watch it on Amazon Prime, until now! So I quickly got into it watching season 1, and then popped the DVD's into my laptop to watch Season 2! They are so easy to binge watch! I couldn't stop watching them to see what was going to happen next! I hope that there's a Season 3, because there's so much more to tell! With a huge all-star cast, Big Little Lies is awesome! For me, it's such a great way to take a break from reality and watch a show worth learning more and more about!