Pair of tickets to Medival Times in MD - re-solve *GL

5-pack of Hallmark Mother's Day cards - All 50 U.S. States - Books I Think You Should Read *RC

Giveaways With Over 180 Entries, but under 500:
Kunde Kreations Burp Cloth set of their own! Winner’s choice of above pictured Owl Prowl or Time Warp, 2-burp cloth set - U.S. - The Simple Moms *RC

Patrick Jane Solves His Final Case in "The Mentalist: The Complete Seventh And Final Season" On DVD #Review! 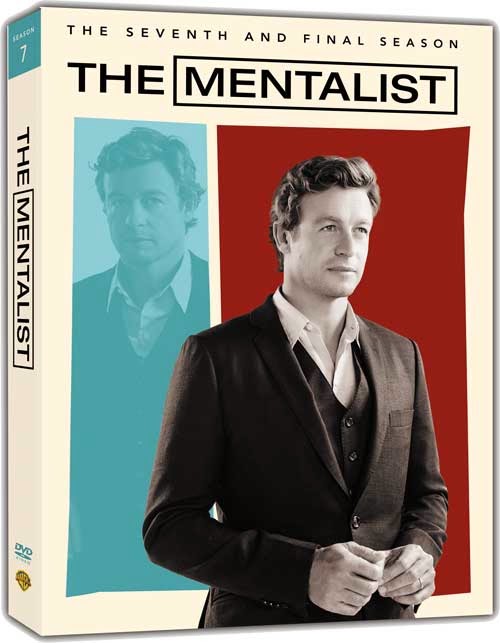 "The Mentalist: The Complete Seventh And Final Season" On DVD contains a three-Disc Set and features all 13 episodes plus a never-before-seen featurette! Available on DVD for purchase today!

Emmy® and Golden Globe nominee Simon Baker is back for the seventh and final season of the clever crime series The Mentalist, which will be released on DVD April 28, from Warner Bros. Home Entertainment Group. The DVD release includes all 13 one-hour episodes from the seventh season, plus an all-new never-before-seen featurette.

The FBI’s masterfully manipulative criminal consultant Patrick Jane is back at it again. Formerly employed by the California Bureau of Investigation (CBI), Jane spent two years off the grid and in exile after tracking down and exacting vengeance upon Red John, the serial killer who murdered Jane’s wife and daughter. After crafting a deal to work for the FBI, Jane convinced former CBI agent Teresa Lisbon to join him. Supervised by the no-nonsense Agent Dennis Abbott, Jane and Lisbon work alongside their former CBI comrade Kimball Cho, FBI analyst Jason Wylie and the young, ambitious agent Michelle Vega. Now that Lisbon and Jane have confessed their love for one another, they must find a way to be partners in both their professional and personal lives as they begin their new relationship.

Also starring Robin Tunney (Prison Break), Tim Kang (The Forgotten), Rockmond Dunbar (Sons of Anarchy), Joe Adler (Shameless) and Josie Loren (Make It or Break It), The Mentalist was created by Bruno Heller (Gotham), who executive produces along with Chris Long (Criminal Minds) and Tom Szentgyorgyi (Lie to Me). The series is produced by Warner Bros. Television.

SPECIAL FEATURE:
Patrick Jane: An Uncommon Man - In homage to the beloved series, Patrick Jane's journey of redemption, from revenge to romance, is chronicled by the extraordinary people and circumstances that caused two diametrically opposite personalities – a Carnie and a Cop -- to fall in love.


Disclosure: I received a copy of "The Mentalist: The Complete Seventh And Final Season" On DVD in exchange for my post. No other compensation was exchanged or received.

Posted by Heather Kelly at 7:10 AM 0 comments

The Ghosts of Peppernell Manor (cozy mystery ebook) - All 50 U.S. States - View from the Birdhouse *RC 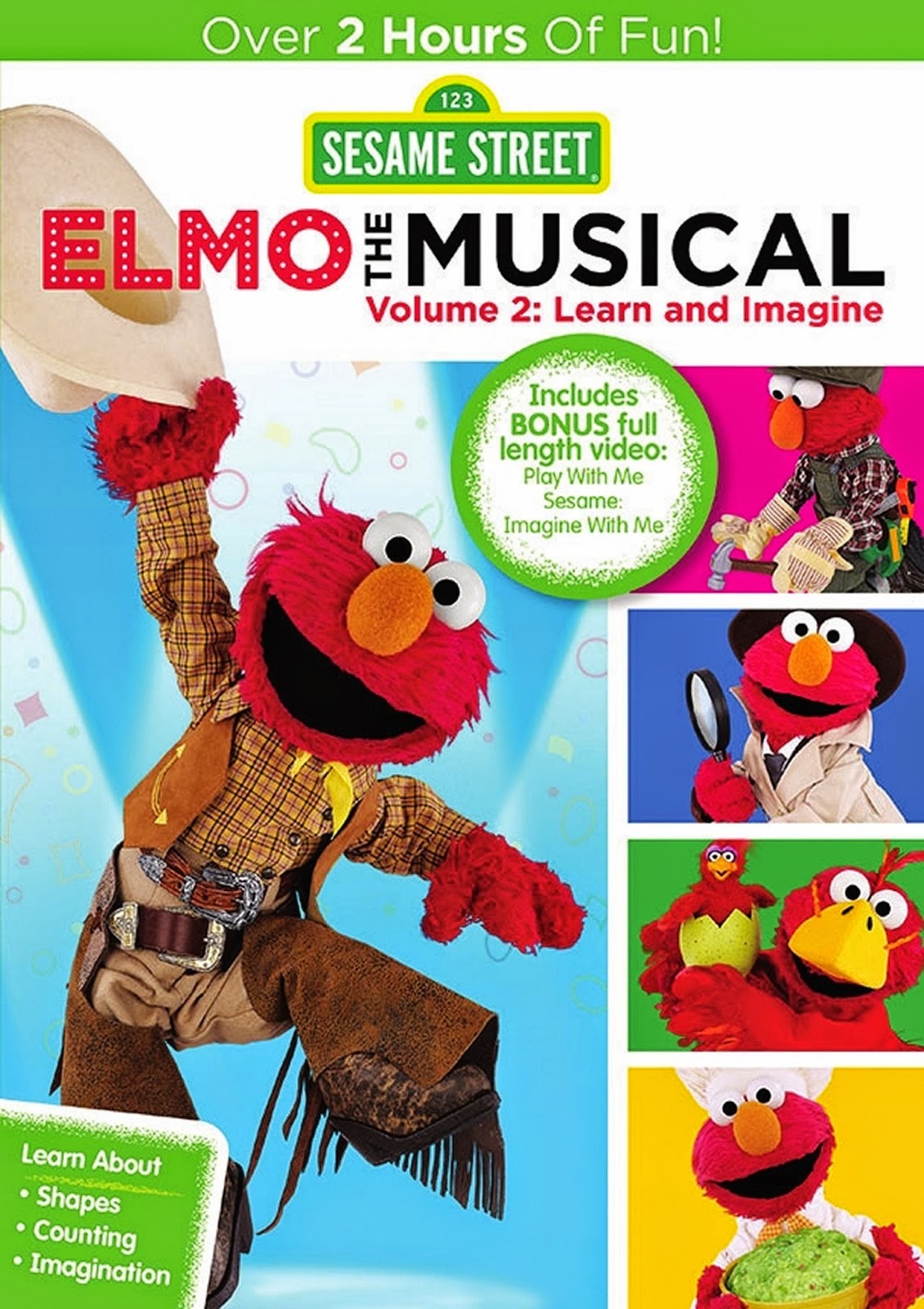 Get ready to Sing, Dance and Learn when "Sesame Street: Elmo The Musical Volume 2: Learn and Imagine" comes out on DVD for purchase this coming Tuesday, May 5th! This DVD also contains a Full-Length Video of Play With Me: Imagine With Me!

Elmo the Musical is cute, funny, and my girls loved dancing to the music. I especially loved the kitty-cows in the beginning of the movie, so hilarious! My five year old daughter finally understands now what a cube is! Thanks Elmo! Your children can also learn about other shapes, numbers, counting, about what half and whole means, tools and more! Elmo the Musical Volume 2 is for infants, toddlers, children and adults of all ages! It's really entertaining and full of learning and music! Everyone loves music and catchy little songs!

About "Sesame Street: Elmo The Musical Volume 2: Learn and Imagine:"
Your favorite furry red monster is ready to sing and dance as Warner Bros. Home Entertainment and Sesame Workshop, the nonprofit educational organization, release Sesame Street: Elmo The Musical Volume 2 on DVD and digital on May 5, 2015 for $14.98 SRP. With over two hours of fun in seven all-new episodes, Sesame Street fans young and old will love to interact with Elmo during his explorations!

In Sesame Street: Elmo the Musical Volume 2: Imagine and Learn, kids will sing, dance, play and imagine along with Elmo on math-filled adventures! They’ll join Elmo as he becomes a cowboy in his musical “The Count-by-Two Kid,” and escorts six kitty-cows through a canyon to the Double Double Dude Dude Ranch Ranch. Next, they’ll don a detective hat with Elmo to help investigate the secret behind all the sneezing. An extension of Sesame Street’s STEAM curriculum (science, technology, engineering, arts and math), each episode is an interactive, fun-filled musical adventure created by Elmo and the child at home. Focusing on imagination and math skills, such as enumeration, relational concepts, addition/subtraction, geometric shapes and many more, Elmo takes viewers on thrilling explorations as he imagines himself in many adventures. This DVD also includes bonus full-length video of Play With Me Sesame: Imagine With Me, which focuses on imagination and interactive learning.

“Warner Bros. Home Entertainment is excited to bring back the musical enthusiasm of ‘Elmo the Musical’ with Sesame Street: Elmo the Musical Volume 2: Imagine and Learn.” said Jeff Brown, WBHE Executive Vice President and GM of Non-Theatrical Franchise Marketing. “We are eager to continue in grand Sesame Street tradition, providing upbeat and educational programming to children in each of these exciting episodes.”

Enter below using the Rafflecopter form for a chance to win your own copy of "Sesame Street: Elmo The Musical Volume 2: Learn and Imagine" on DVD! Giveaway open to residents of the main 48 continental United States only, 18 years of age or older.

Disclosure: I posted this review and giveaway post in exchange for a copy of "Sesame Street: Elmo The Musical Volume 2: Learn and Imagine" on DVD. No other compensation was exchanged or received.

Current estimates are that one in five Americans will develop skin cancer in their lifetime. More than 3.5 million cases of non-melanoma skin cancer, including basal cell carcinoma and squamous cell carcinoma, are diagnosed in the United States every year.

The worst thing about skin cancer is that left untreated, it can kill you. A secondary concern is worrying about the scar one may be left with after treatment. Patients won't know how bad it will be until the doctor starts cutting and learns just what the cancer is like. This is particularly nerve wracking when the cancer is on the face. The good news is that now there is Dermaflage, the first at home cosmetic that functions as a second skin to fully cover skin cancer scars on the face and body. 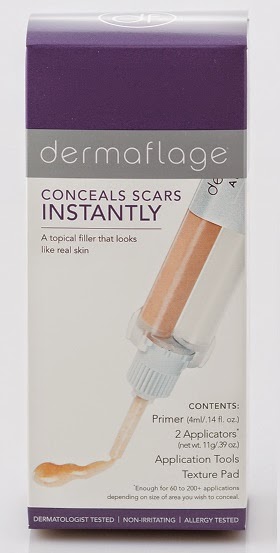 WHAT IS DERMAFLAGE?
The recessed nature of these imperfections cannot be effectively hidden using makeup, leaving expensive and often ineffective medical procedures as the only viable option. Far superior to traditional cosmetics and concealers, Dermaflage fills and conceals the recessed area. Used improperly, makeup can look cakey and does not effectively fill the sunken areas of the skin. Dermaflage is translucent to let your natural pigment come through, flexible so that it moves with the skin, water proof and lasts all day.

FROM THE EXPERTS
Kim Greene, veteran beauty and special effects makeup artist with over 50 Department Head Film and Television credits. “I use Dermafage personally to conceal a Mohs scar above my lip from having skin cancer. As a professional makeup artist in film and TV it's a staple in my kit to use on my actors to conceal scars including those caused by skin cancer removal. The Dermaflage is nearly invisible. I also use it to create realistic makeup special effects since it mimics skin so well."

Dr. Carl Soderstrom, Illinois Board Certified Dermatologist “Silicone in skin products is amazing. I have been using Dermflage for a couple of years now and the results are unbelievable. Scars can be covered cosmetically and concealed for hours and days-instantly. What I like the most is chicken pox scars, acne scars, and post trauma or surgical scars that are depressed can be filled to perfection. Color matching is easy, and most of all, patients love it. I have seen no adverse reactions in my patients.”

HOW TO USE DERMAFLAGE

GENERAL MAKEUP TIPS WITH DERMAFLAGE
Purchase your own Dermaflage products on Dermaflage.com. 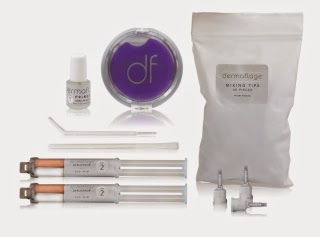 Enter below using the Rafflecopter form for a chance to win a Dermaflage Premium Kit ($59.95 ARV)! Kit includes approximately 2-3 month supply; Two (2) applicators of the selected tone and some tools: mixing stick, precision application tool, texture Pad and 30 mixing tips! Giveaway is open to residents who live in the Main 48 United States only, 18 years of age or older.

Disclosure: I received no financial compensation or products in exchange for my giveaway post. The above information came from the sponsor and is not that of me, Heather Kelly, nor my Airplanes and Dragonflies blog.

$50 Worth of Vegan Chocolates - U.S. - Fellowship of the Vegetable *RC