DigiPals Character of your Choice - U.S. - If You Want It Done Right *RC 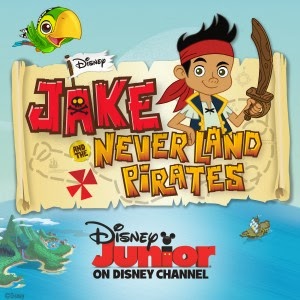 JAKE AND THE NEVER LAND PIRATES - "Treasure of the Pirate Mummy's Tomb" - Jake's crew encounters a pirate mummy while they search for a magical staff that will dig Captain Flynn's ship out of desert sand. This episode of "Jake and the Never Land Pirates" airs Friday, January 3 (8:30 AM - 9:00 AM ET/PT), on Disney Junior. (DISNEY JUNIOR) 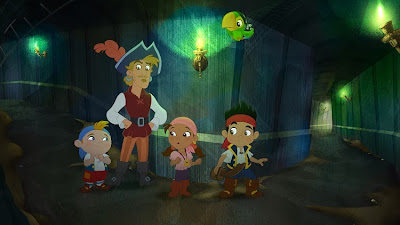 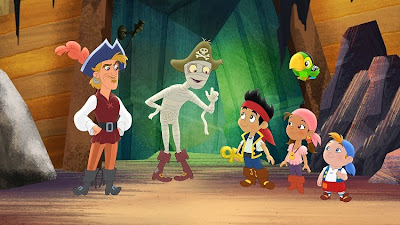 Pictures above came from Disney Junior.

New episodes of "Jake and the Never Land Pirates" will air every Friday throughout January and February culminating with the premiere of a special extended episode on Friday, February 28, featuring three 11-minute stories that pit Jake against Hook in an ultimate showdown.  All featured episodes will be simulcast for verified users on WATCH Disney Junior in conjunction with the television premieres and will become available the following day on WATCH Disney Junior, Disney Junior on Demand, iTunes, Xbox and Amazon.Beginning Friday, January 31, DisneyJunior.com/Jake will debut the new game, "Jake and the Never Land Pirates: The Super Pirate," where players can take on the role of Jake as he attempts to retrieve the Mega-Mecha Sword that Captain Hook has stolen.  Each Friday through February 28, kids are invited to unlock a new game level.

The strong connection kids 2-7 and their parents have with the characters and stories of "Jake and the Never Land Pirates" has led to brand extensions across other Disney businesses.  The series is prominently featured in Feld Entertainment's 90-city nationwide tour, "Disney Junior Live On Tour! Pirate and Princess Adventure," and Jake and his crew are an integral part of the popular "Disney Junior Live on Stage!" attraction at Disney California Adventure park at the Disneyland Resort and Disney's Hollywood Studios at the Walt Disney World Resort in Florida where the Jake character also meets with fans daily.  Disney Consumer Products has licensed LEGO® DUPLO® sets, action figures and playsets, board games, bikes, apparel and bedding, available at major retailers nationwide.

"Jake and the Never Land Pirates" airs daily on Disney Junior and Disney Channel's Disney Junior programming block for kids age 2-7. The series stars Cameron Boyce as Jake; Madison Pettis as Izzy; Jonathan Morgan Heit as Cubby; David Arquette as Skully; Corey Burton as Captain Hook; Jeff Bennett as Mr. Smee and Bones and Loren Hoskins as Sharky. Rob LaDuca is executive producer, Mark Seidenberg is producer/story editor and Howy Parkins is director, all of "Mickey Mouse Clubhouse."  The series is produced by Disney Television Animation.Disney Junior reflects the emotional connection generations of consumers have to Disney storytelling and Disney characters, both classic and contemporary. It invites mom and dad to join their child in the Disney experience of magical, musical and heartfelt stories and characters, while incorporating specific learning and development themes designed for kids age 2-7. Disney Junior's series blend Disney's unparalleled storytelling and characters kids love deeply with learning, including early math, language skills, healthy eating and lifestyles, and social skills. In the U.S., Disney Junior is a daily programming block on Disney Channel and a 24-hour channel.  There are 33 Disney Junior channels in 24 languages around the world.

Posted by Heather Kelly at 5:46 AM 0 comments

Trust Me, by Rebecca Graf (e-book) - Worldwide - Books I Think You Should Read *RC

Tote of Many Colors Zipper Top in your choice of color - U.S. - Makobi Scribe *GT

Choice of Wearever Diabetic Socks - U.S. - Try It Like It *RC

Winner of the Six Monster Jam tickets is: 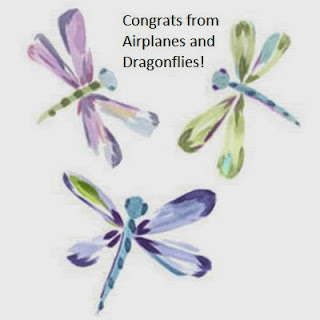 Congrats to: Sherl M. B. 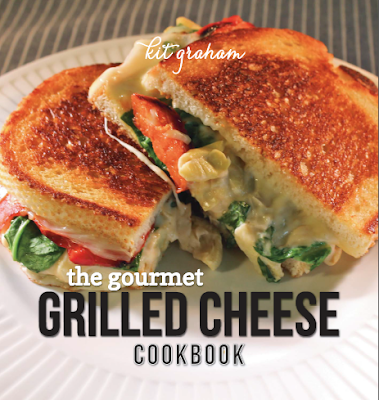 My family and I love cheese! We especially love sandwiches with all types of cheese in them! We made some ham for Christmas Day dinner, and we have been using it in as many things that we can think of. Last night, we made mini ham and cheddar cheese sandwiches on rolls! The kids ate them up! My husband thought it was such a great idea, that he made some for himself later last night when he was hungry. We had a late lunch, so we all ate dinner at different times last night, which happens once in a while.

Grilled Cheese sandwiches are great comfort food for some of us. They are especially good when it's cold outside. It's winter right now here in Tennessee, and boy is it cold! Any food that is nice, warm, and easy to fix is what's on the menu for dinner in our home.

Below is some information about the book:
They say anything is better once you put cheese on it. Kit Graham of The Kittchen, a popular blog out of Chicago, knows this all too well. She is finally sharing her obsession with cheese as she launches her new cookbook, The Gourmet Grilled Cheese Cookbook.

Grilled cheese is the ultimate comfort food. It can be simply made from bread, cheese, and butter, or it can become a gourmet meal with the addition of more sophisticated ingredients. The goal of The Gourmet Grilled Cheese cookbook was to create recipes that transform the humble grilled cheese into something ‘more’.

About the Author
Kit Graham writes thekittchen.com, a food site focused on original and practical recipes. The Kittchen has been featured on Refinery 29, Eater, The Frisky, and The Urbaness. Kit grew up in Kennebunk, Maine and currently resides in Chicago with her husband.

Enter below using the Rafflecopter form for a chance to win your own copy of "The Gourmet Grilled Cheese Cookbook!"


Disclosure: I received a copy of The Gourmet Grilled Cheese Cookbook in exchange for my post. No other compensation was received or exchanged.

Six (6) Tickets to Monster Jam at the Bridgestone Arena in Nashville, Tennessee - Airplanes and Dragonflies *RC

Family 4 pack of tickets to Wednesday (1/8/14) Nights performance of Disney On Ice Rockin' Ever After at US Airway Center, Phoenix, AZ - Arizona Mama *GT

My daughter Chloe's first Gingerbread house that we made at her school! 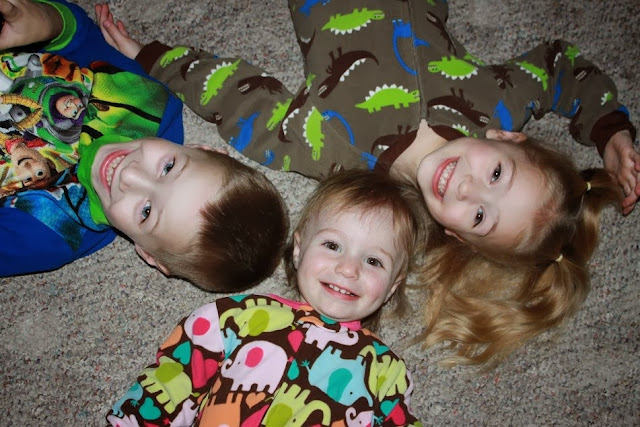 First Christmas card photo for 2013, done like this! It was the only way they would all sit (lay) still and smile!

Posted by Heather Kelly at 7:01 AM 2 comments

$50 GC to the store of your choice - Worldwide - WishMeThis.com

Choice of a dinosaur or octopus Bottle Pet - U.S. - The Simple Moms *RC

Choice of either a a romper with two bibs, or any top with two bibs and the lounge pants from Pickle Peas - U.S. - Dragonfly Sweetnest *RC 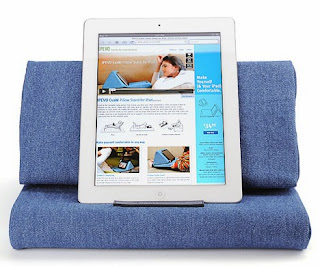 IPEVO PadPillow is a soft, huggable pillow lets you rest your iPad, Tablets, Kindle, Kindle Fire, and Books, or Leappads, on your lap or stomach for relaxing on the couch or lounging in bed!

The IPEVO PadPillow comes in six different colors: Blue Denim, Charcoal Gray, Light Khaki, Orange, Honeysuckle (kind of a coral color), and Lemongrass (green). There are even instructions at the bottom of their website on how to make your own PadPillow from scratch at home! 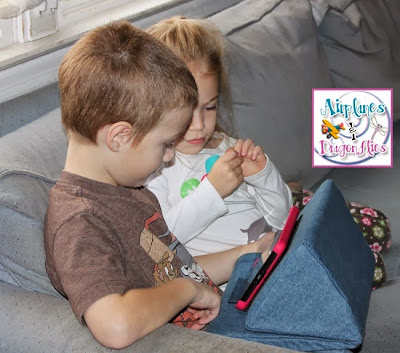 My thoughts:
My children and I love our PadPillow! So much so that we are going to have to purchase a second one! We are always fighting over who gets to use it. I like to play games on my Kindle Fire with it. My children like to play games on their tablet, my kindle fire, or on their leappads while using out PadPillow. I like our PadPillow! I can't wait to travel with it when we take our second major trip with our children this spring! 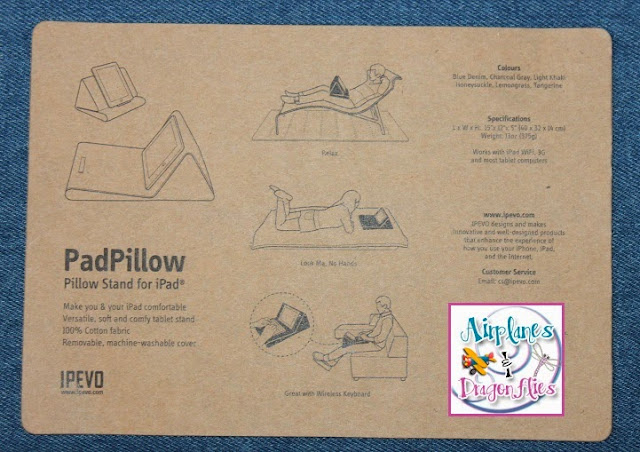 Purchase a PadPillow for your family today on Amazon for only $24.95: http://www.amazon.com/PadPillow/pages/default

Or Enter below using the Rafflecopter form for a chance to win your very own PadPillow in Charcoal Gray! (Giveaway open to residents of all 50 U.S. States! No P.O. Boxes, sorry.)


Disclosure: I received a PadPillow in exchange for my review and giveaway post. No other compensation was exchanged or received.

Chicken Soup For the Soul: Just Us Girls - book - U.S. - Our Village is a Little Different *RC

Cloudy With a Chance of Meatballs 2 for the Nintendo America 3DS - U.S. - gaynycdad