Disclosure: I received one copy of the book "Diana: Princess of the Amazons" in exchange for my post from DC Entertainment. No other compensation was exchanged or received. The opinions below are mine and mine alone. 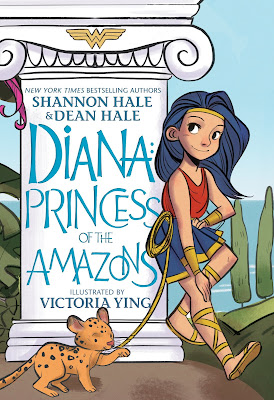 Diana: Princess of the Amazons

Now Available to Purchase At Stores Everywhere Books Are Sold

This January, lasso in the New Year with Diana: Princess of the Amazons, a new middle grade original graphic novel from DC.

Perfect for readers ages 8-12, Diana: Princess of the Amazons is written by New York Times bestselling co-authors Shannon and Dean Hale and illustrated by popular artist Victoria Ying. This heartwarming tale follows 11-year-old Diana as she navigates the highs and lows of growing up as the only child on the entire island of Themyscira. It’s a story about family and friendship, learning from mistakes, and finding inner confidence. On sale everywhere books are sold today. (MSRP: $9.99)

Synopsis:
Cut off from the rest of the world, Diana has had an idyllic childhood on Themyscira. But now, at 11 years old, she’s beginning to feel more and more isolated. Though she has many “aunties” and a loving mother, she is an only child. THE only child, in fact.

After an escapade goes wrong, Queen Hippolyta chastises Diana for not living up to the Amazon standard. Diana just can’t seem to measure up, no matter what she does! Literally every other person on the island is an adult proficient in their trade and mighty in body, while she is gangly, sometimes clumsy, and not particularly proficient in anything. She’s not Wonder Woman yet. What Diana needs is a friend—someone her own age whom she can talk to. But when she decides to take matters into her own hands, she may just make a monster instead.

My Thoughts:
My ten year old daughter read this book and really liked it. She enjoys graphic books and novels and reads through them quickly. She enjoys reading about her favorite super heroes lives before they became super heroes and when they were younger. Graphic novels like these help younger readers to understand their favorite super heroes more in depth. I felt that it was a cute, enjoyable book. I just wish that there were AR tests for them in our schools for our children who can't read lengthy chapter books all the time. 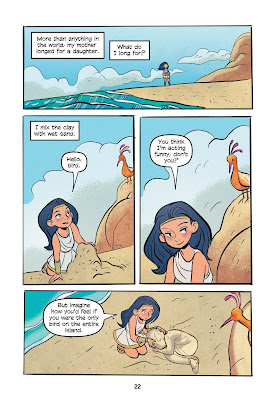 The Hales are veterans in the children’s publishing space and are the co-authors behind acclaimed and fan-favorite novels and graphic novels including the Princess in Black series, Rapunzel’s Revenge, and The Unbeatable Squirrel Girl, among others. Both are longtime fans of Wonder Woman, and this book marks their first project with the character and first work with DC.

“I was so excited to write about young Wonder Woman,” said Shannon Hale. “I always wondered what it would feel like for young Diana to grow up as the only child in her world. How extraordinary—but also potentially lonely. We started from there and got to explore who Wonder Woman was as a child, and challenge her with an adventure that would help shape who she would become.”

Diana: Princess of the Amazons also marks Ying’s first work with DC and her very first graphic novel. Ying comes to DC from an animation background, having worked on such hit Disney films as Tangled, Frozen, and Wreck-It Ralph, among others. Ying has also written and illustrated several children’s picture books and was thrilled to work on this original story starring Wonder Woman.

“It was a real treat to explore Diana as a child,” said Ying. “I had a blast drawing her and felt like I got to be her friend too.”

Leading into its January on-sale date, Diana: Princess of the Amazons has already received critical acclaim from such outlets as Publishers Weekly, Kirkus Reviews, and School Library Journal, among others. The book was also selected by IndieBound’s prestigious Kids Next list for winter and is one of DC’s most anticipated releases of 2020.

“Diana: Princess of the Amazons is DC’s first solo Wonder Woman graphic novel geared toward middle graders, and we are thrilled with the reception so far,” said Michele Wells, vice president and executive editor, DC Books for Young Readers. “The Hales’ heartfelt reimagining of Wonder Woman combined with Ying’s playful and energetic illustrations make this original story a great introduction to the iconic superhero. Its debut will mark one of the largest print runs we’ve set since launching our young reader program, and we can’t wait to share this book with the next generation of Wonder Woman fans!”

FOR DIANA: PRINCESS OF THE AMAZONS

Enter below using the Giveaway Tools Form for a chance to Win your own copy of DC's "Diana: Princess of the Amazons!" Giveaway open to residents who live in the main 48 continental United States only, 18 years of age or older. Giveaway ends on 1/31/2020.