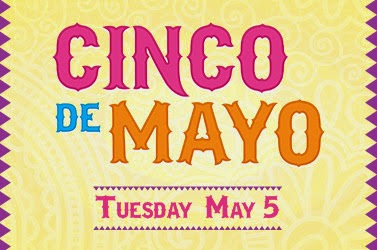 Cinco de Mayo is a holiday that calls for celebration and entertaining! According to History.com, “Cinco de Mayo is widely interpreted as a celebration of Mexican culture and heritage” and revelers in the United States “mark the occasion with parades, parties, mariachi music, Mexican folk dancing and traditional foods.” If you’re among the millions celebrating this year, but need some inspiration for a crowd pleasing fiesta with true Mexican flare, you’re in luck!

*Here are some fun avocado facts for you to share this Cinco de Mayo from Avocados from Mexico: 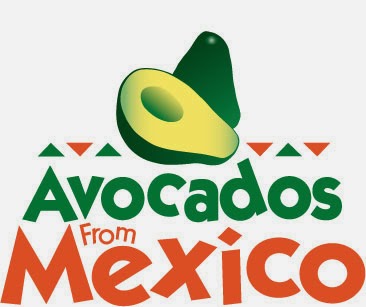 Are you ready for Cinco De Mayo? Avocados From Mexico wants YOU to show us how you're celebrating in our #CelebrateCinco contest!

· The Assignment: Avocados From Mexico looking for your best pictures of how you #CelebrateCinco in four categories: Decor, Mexican Fare, Spirits and Guac.

· To enter the contest, tag your photo with hashtag #CelebrateCinco beginning May 1st on Twitter or Instagram or upload a pic from a Facebook album via this site http://www.avocadosfrommexico.com/celebrate-cinco-contest/ (Remember to claim your entry with the submission form!)

· Our call for entries follows the schedule below — in our countdown to Cinco De Mayo! You can submit ONE photo each day of the contest.

o May 5 - All categories

· Prizes: The top winner in each category — chosen by our panel of judges — gets a $500 cash gift card!

· Judging criteria based on: Fit to Contest / Category theme, Composition and Originality


ABOUT PATI JINICH: Born and raised in Mexico City, Pati Jinich is host of the hit PBS cooking series “Pati’s Mexican Table,” which is currently airing its fourth season nationwide (TV listings by zip code here: http://bit.ly/PMTstations). She served as a political analyst before jumping into the kitchen. Her first cookbook, Pati’s Mexican Table: The Secrets of Real Mexican Home Cooking was recommended by The New York Times and included in Amazon’s Top 20 2013 cookbooks. Jinich is a regular guest on The Chew, The Today Show, The Talk, All Things Considered and The Splendid Table. She has been featured in The Washington Post, The New York Times, The Chicago Tribune and other leading national and regional press. She has cooked for President Obama at the White House’s Cinco de Mayo dinner.

Here are some FREE Recipes from Pati Jinich's Cookbook: 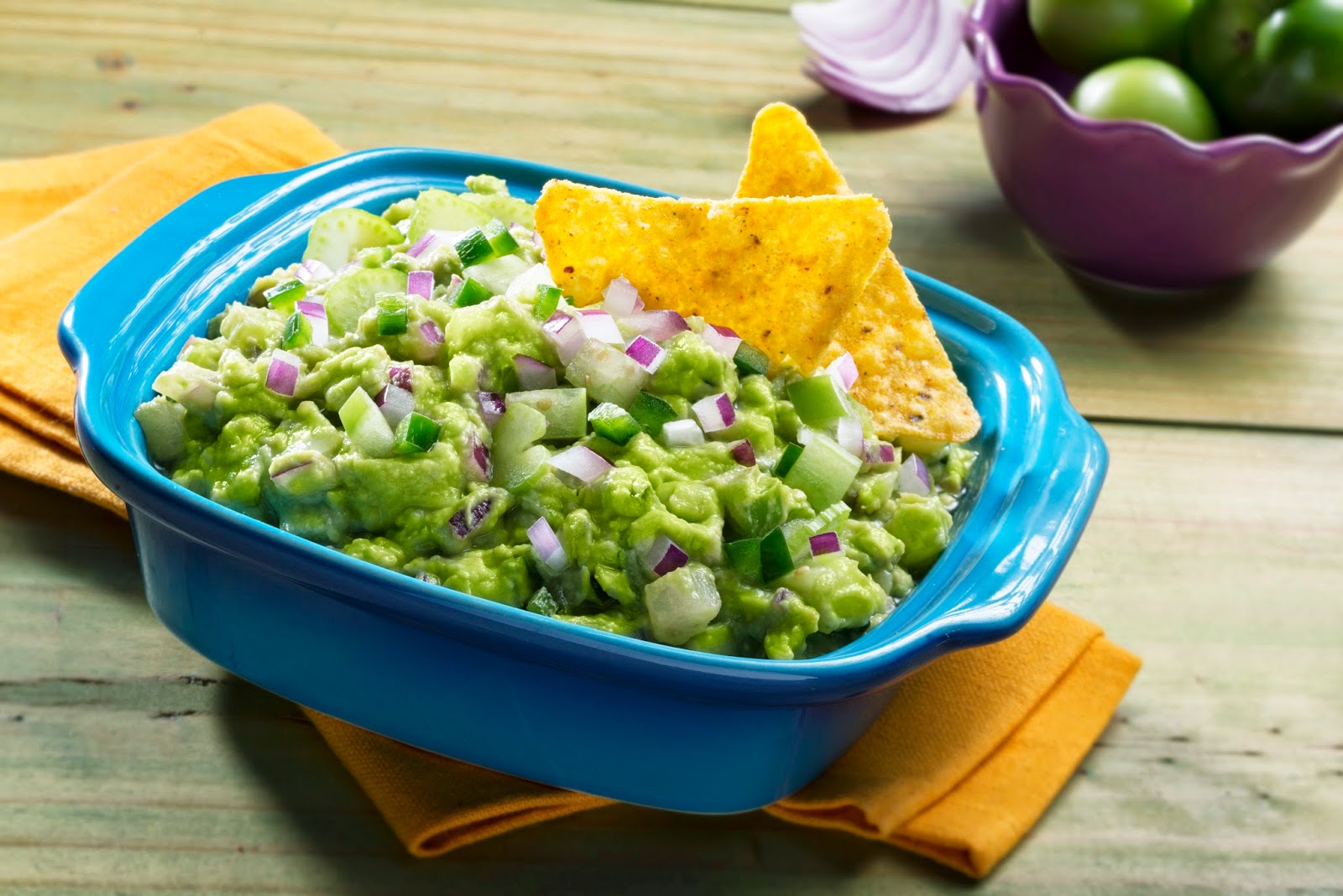 This is a delicious cross between a pico de gallo salsa and a guacamole, so I am calling it a pico de guac. It is mostly green in color, except for the red onion, which adds a welcome pungent note and a sprinkle of color. This pico de guac is also tart, but in a most delightful way and with different kinds of tartness: bright from the tomatillos, crisp from the green apples, and mild from the cucumbers.

I love to use it as a guacamole for an eye-opening appetizer. Yet, it is fabulous ladled as a chunky salsa on top of grilled fish, such as salmon. If you chop the ingredients into bigger bites, it makes for a saucy side salad. Have some left over? Spoon it inside of a chicken or cheese sandwich.

This pico de guac is versatile to no end.

To Prepare:
In a large mixing bowl, combine all ingredients and mix well. Taste for salt, and add more if needed. 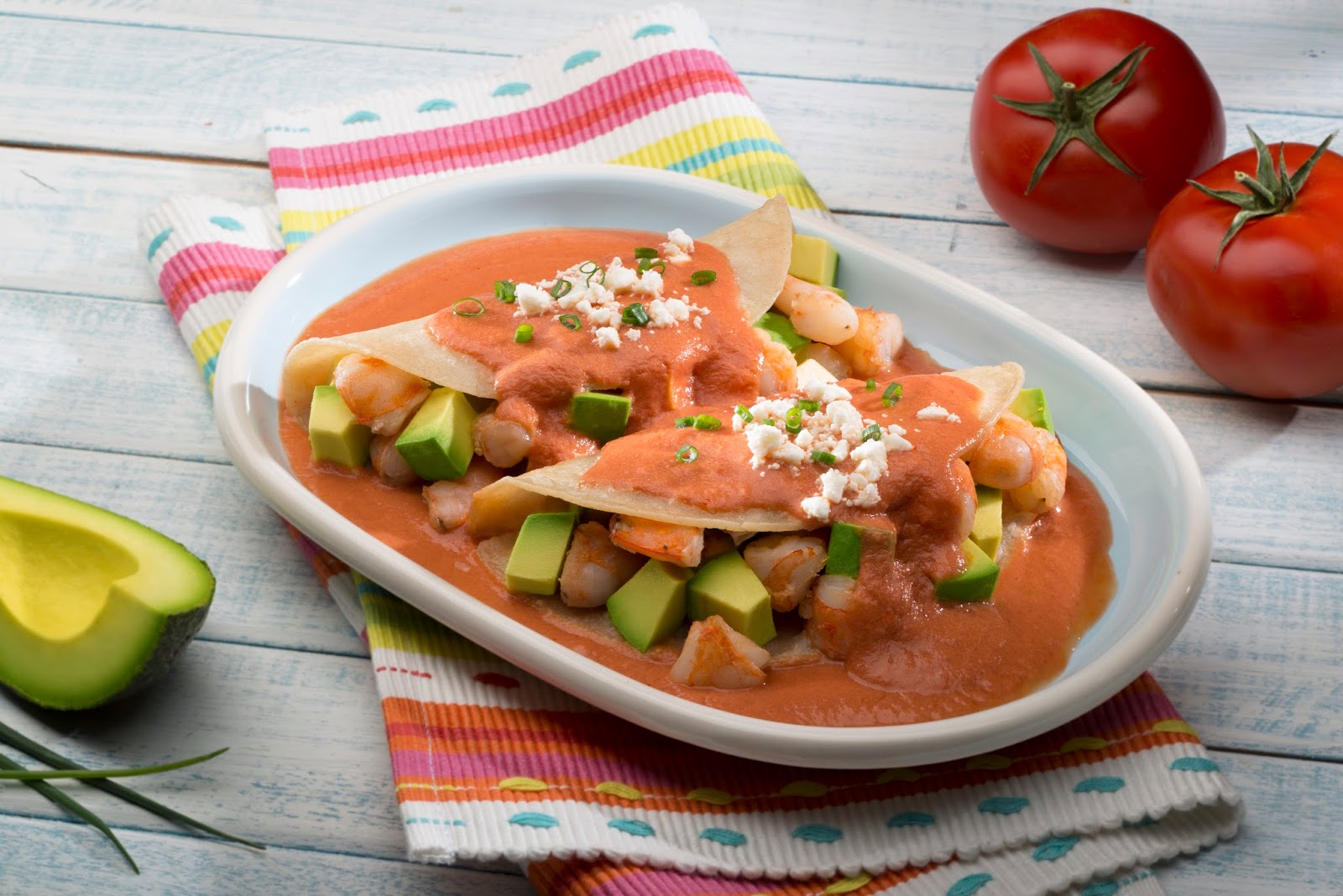 These are my kids most requested enchiladas. Tender seared shrimp are paired with smooth chunks of avocado and then they fill soft corn tortillas. Finally, they are bathed in a creamy and rich red tomato sauce.

To Prepare:
1. To make the sauce: Place the tomatoes, garlic and chiles in a medium saucepan and cover with water. Place over medium-high heat and simmer for about 10 minutes, until the tomatoes are cooked through, mushy and soft.

2. Place the cooked tomatoes, garlic and one of the chiles in a blender, along with the chopped onion, 1/2 teaspoon salt, grated nutmeg, and 1-cup broth. Purée until completely smooth, taste and add the second chile if you would like more heat.

3. Rinse and dry the saucepan, add 1 tablespoon of oil and place over medium heat. Once hot, but not smoking, pour in pureed tomato sauce and cover partially with a lid. Let it simmer for about 10 minutes, stirring occasionally, until it thickens, seasons and deepens in color to a much darker red than where it started.

4. Remove the lid, reduce heat to medium-low and add the cream. Stir and keep at a steady low simmer for about 8 to 10 more minutes, or until thickened and creamy, and it coats the back of a wooden spoon.

5. To heat the corn tortillas: Heat the tortillas on an already hot comal or skillet set over medium-low heat, for a minute or so per side, until they have lightly browned without toasting. Alternatively, “pass them through hot oil”: Heat enough oil to reach 1/2-inch deep in a medium sauté pan, over medium heat until hot. Gently glide each tortilla through the oil, one by one, for about 10 to 15 seconds on each side. So they completely heat through, lightly fluff and change color. Transfer the tortillas to a paper towel-covered plate. Keep warm.

6. To make the shrimp filling: Heat 1 tablespoon oil and 1 tablespoon butter in a large skillet set over high heat. Once the oil is very hot, but not smoking, and the butter has melted and is bubbling, add half of the shrimp and the remaining 1/2 teaspoon of salt.

7. Cook the shrimp for just a couple minutes, stirring a few times, until they are cooked through and a bit browned on the outside, but crisp and plump on the inside. Remove with a slotted spoon and place in the bowl.

8. Mix the shrimp with the diced avocado.

9. To assemble the enchiladas: One by one, glide each prepared tortilla through the sauce, which should still be hot. If not, heat again over medium heat. Place each bathed tortilla on a plate, spoon about 3 tablespoons of the shrimp and avocado mixture in the middle and fold as you would a quesadilla.

10. Place the filled enchiladas on a platter and continue with rest of the tortillas, laying each one gently on top of the edge of the other. Once you are done, generously spoon more of the tomato sauce on top. Garnish with chives and crumbled cheese. 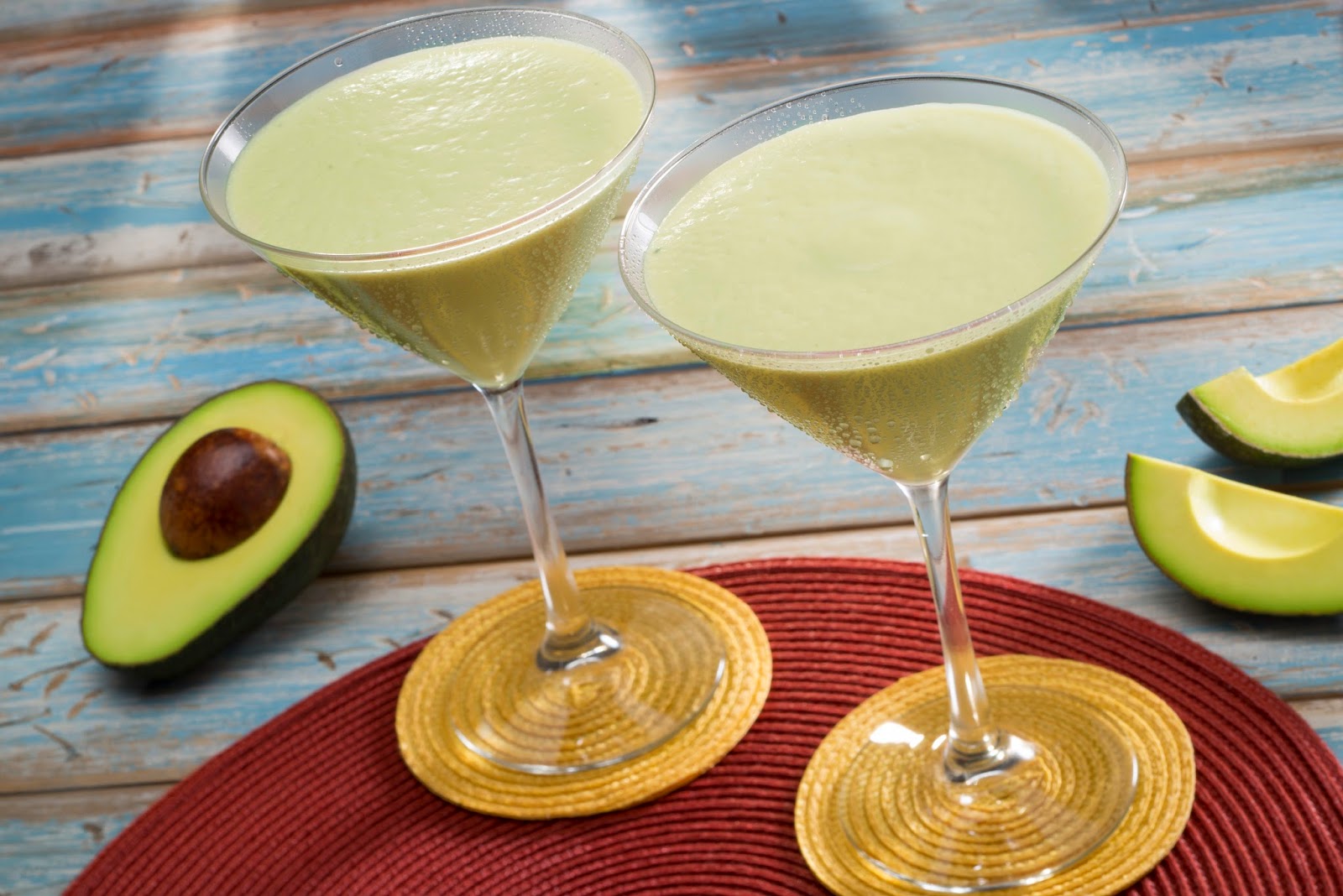 Shake up the way you usually think of using avocados in this simple, satisfyingly sweet, creamy cocktail. It’s perfect for a girls’ night in or an evening in the backyard with friends and neighbors. Better yet, you can even leave out the alcohol and make it a frappe for the kids!

To Prepare:
Pour all of the ingredients into a blender and puree until smooth. Pour into a cocktail shaker with ice. Shake it and strain into a chilled martini glass. 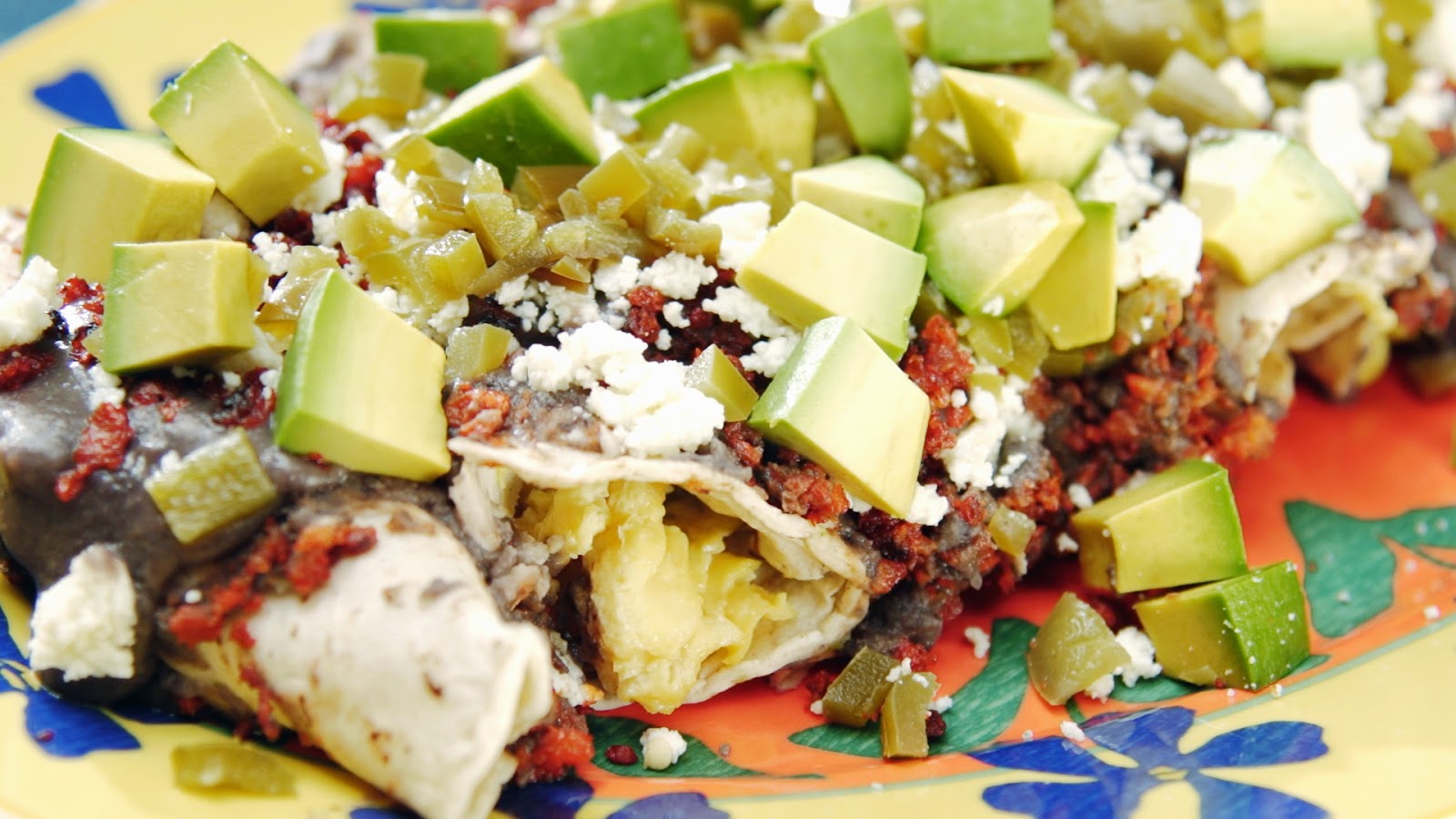 To Prepare:
1) Place the cooked black beans and their cooking broth in a blender along with the sauce from the chipotles in adobo and the chipotle chile if using. Place in a medium saucepan, heat over medium-low heat, stirring occasionally, until very hot. Reduce the heat to the lowest possible setting and keep warm. The puree should have the consistency of heavy cream.

2) Heat a large skillet over medium heat. Once it is hot, add chorizo, and cook, crumbling as it cooks with a wooden spoon or spatula, until it has browned and crisped, about 5 to 6 minutes, scrape into a bowl, cover and set aside.

3) Pre-heat a comal or cast iron skillet over medium heat.

4) Heat the corn tortillas, a pair at a time, in the pre heated comal or skillet, about 30 seconds to 1 minute per side, you want them to be completely heated and even slightly toasted.(Alternatively, the tortillas can be quickly “passed through hot oil”, that is quickly fried, 10 seconds per side, over pre heated oil in a medium skillet over medium heat, then drained). One by one, dip a tortilla in the black bean sauce, and place on a platter, folded. Continue with the remaining tortillas.

5) When all the tortillas are dipped and folded, pour more black bean sauce on top. Cover with the cooked chorizo and avocado. Drizzle with Mexican cream.

Disclosure: I received some Avocado products, a cookbook and gift card in exchange for my post. No other compensation was exchanged or received.

Two Coupons good for either Dial Body + Hair Wash or Foaming Hand Soap - U.S. - What I Live For *RC

One month’s supply of AllWhitesEggWhites - All 50 U.S. States - Avocado Pesto

Invitation to the Indulge, Fashion + Fun for Moms Event at Grapevine Mills and a Simon Giftcard valued at $100 - U.S. - A Frugal Friend

I Wish I Was a Spaceman! - children's book - View from the Birdhouse *RC

"It’s All Greek to Me" Cookbook by Debbie Matenopoulos - U.S. - Organized 31 *RC

One coupon for your choice of Free Dial Baby Body and Hair Wash or Dial Kids Foaming Hand Wash - U.S. - Crumbs in the Couch *GL

Coupon for a bottle of Free Dial Kids product (3 Winners) - U.S. - Hanging Off The Wire *RC