100 Days to Live being released across all North American TVOD platforms
and on Blu-Ray, DVD, and Digital on February 2, 2021 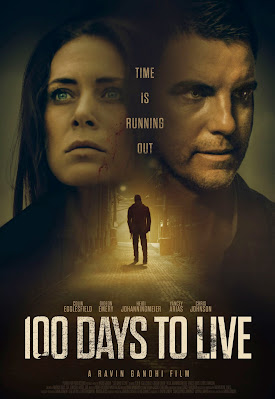 My Review and Thoughts:
At first, I wasn't sure that I could watch this movie! Right at the beginning, a lady disappears. It seems at though she's kidnapped and drugged...  Then, it goes into telling the story of Rebecca and about how and when she meets Gabriel. This movie keeps you guessing. I didn't read the synopsis or watch the movie trailer. I wanted to be surprised to see what would happen. It kept me on the edge of my seat! I love movies like this!
If you're looking for a movie that keeps you guessing, on the edge of your seat, and the ending is totally not what you expect it to be, then check out "100 Days to Live!"
SYNOPSIS: Haunted by the tragic death of her mother, Rebecca Church (Heidi Johanningmeier, Fox’s Proven Innocent) has dedicated her life to the mental health profession. Recently engaged to Gabriel Weeks (Colin Egglesfield, TNT’s Rizzoli & Isles), a handsome and successful options trader, Rebecca finally seems happy.
But when her fiancé suddenly disappears, leaving behind a chilling photo album with “Gabriel Was Saved” on the cover, Rebecca learns he was abducted by a serial killer dubbed “The Savior,” who stalks his victims for 100 days before killing them.
Rebecca must work with detectives Jack Byers (Yancey Arias, USA's Queen of the South) and Greg Neese (Chris Johnson, ABC’s Betrayal) in a race against the clock once she discovers The Savior is a former colleague named Victor Quinn (Gideon Emery, Netflix’s Scream: The TV Series), whom she thought had committed suicide.
100 DAYS TO LIVE world-premiered at the San Diego International Film Festival, where it was awarded Best World Premiere and Best First Time Director (For Chicago-based filmmaker and industry CEO Ravin Gandhi.) This visceral thriller will surprise you right until the credits roll (we’ve seen it all, and it actually does surprise you!)
Director/Writer: Ravin Gandhi
Producers: Ravin Gandhi | Christopher Jennings | Rhyan LaMarr
Executive Producers: John W. Bosher | Chris Charles | Ravin Gandhi |Christopher Jennings | Rhyan LaMarr | Marisa Ross
Principal Cast: Colin Egglesfield; Gideon Emery ; Heidi Johanningmeier; Yancey Arias; Chris Johnson
Director of Photography: Nicholas M. Puetz
Social:
Facebook: https://www.facebook.com/100DAYSTOLIVEMOVIE
Instagram: https://www.instagram.com/100daystolivemovie/
IMDB: https://www.imdb.com/title/tt10949778/?ref_=nv_sr_srsg_0