Combo 6-Pack of the Latest and Breatest Coupons - U.S. - Having Fun Saving *RC

Bop It! Smash from Hasbro - gaynycdad

Quest For Zhu/Zhu Zhu Pets Prize Package (DVD of QUEST FOR ZHU the movie, 1 Limited Edition Collectible ZhuZhu Pets Figurine, and a copy of the Official Soundtrack CD to QUEST FOR ZHU) - gaynycdad

Pair of Lee shorts of your choice - U.S. - BlondeMomBlog

Up: A Mother and Daughter’s Peakbagging Adventure - book (2 winners) - 5MinutesForMom.com

The Complete Idiot's Guide to Couponing - U.S. - My Springfield Mommy

Big Box of Pampers and one pack of Pampers Wipes - U.S. - My OKC Mommy

Anne Taintor book - Someone Has To Set A Bad Example and an Anne Taintor Shopper - U.S. - Hanging Off The Wire

One bottle of All Natural Neem Tooth & Gum Powder - U.S. - Hug A Tree With Me *RC 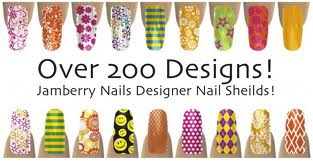 Check out Jamberry Nails and purchase yours today!

Tell her that Heather sent you!

I Am Almost 34 Weeks Pregnant!

It has gone by SO fast. But it's a good thing, as I am really ready to be done being pregnant. I have A LOT of pain and pressure, braxton hicks contractions, real contractions, heartburn, aches, I am almost always tired, my right wrist aches 24/7 from carpal tunnel syndrome, and my right knee and my ankles decided to join in the fun with aching on and off, I guess when the mood suits them, they do it. But it's a never ending cycle. I haven't felt good since I was two weeks pregnant.

I had morning sickness something awful with this pregnancy, something I didn't have with my other two. It continued until a few weeks ago, and since then, I haven't thrown up or felt sick.

Also, this little bugger likes to push up on my lungs with her little feet. Sometimes it feels like the wind has been knocked out of me. I can't go up a flight of stairs without feeling like I just ran a race. The hot flashes are unreal! I don't like feeling hot or cold, I like feeling comfortable. So having a hot flash a few times a day and to have sweat pouring down from my forehead, is not a nice thing for me. Again, I never had these issues when I was pregnant with my other two children. I don't want to be pregnant again after this. I am done having children, really, I am! Not to mention that my 4 1/2 year old son and my almost 3 year old daughter have been giving me a run for my money, time, and patience these past eight months.

Oh, and my husband, I can't forget about him! He has been so patient and so kind. He did some grocery shopping for me yesterday so that I wouldn't have to take the kids out today and do it. It was really nice of him. Now, if I could just get him to give both kids a bath every two to three days, I'd be happier and feel much better. Giving the kids a bath hurts my back, stomach, hips, not to mention takes a toll on my patience when the kids don't want to listen to me ask them not to splash me. I have found that it's somewhat easier to give them a bath separately. But then it's twice the time in the bathroom, twice the water, and twice the back aches. I just can't win. Needless to say, I am not happy, but I will get through it. FIVE more weeks of this, and this little one will come out via c-section, since this will be my third c-section, we were able to schedule it. I am just hoping that this little baby girl doesn't want to come sooner. I wouldn't mind it, but we have NO ONE to watch our kids if she decides to come before July 13th. After that, she can come if she wants to!

Posted by Heather Kelly at 7:08 AM 0 comments

Package of Zebra Pens - U.S. - Hanging Off The Wire

Three (3) Pack of EZstringer (Cool new product that restrings any drawstring in a manner of seconds back into clothing) - US/CAN - Ah...Deals...Beckee's Deals *RC

$15 GC to According to L Etsy shop - U.S. - the winthrop chronicles

Smoobee brush and a copy of the book - U.S. - CRichman Freebies *RC

Labels: airplanes and dragonflies, give away, low entry giveaways

"LIKE" Shutterfly on Facebook using the link highlighted in Red, and then instructions and a code will appear for you to receive your FREE Father's Day Card! 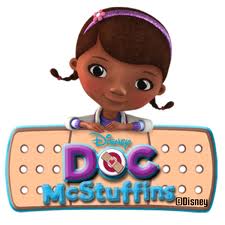 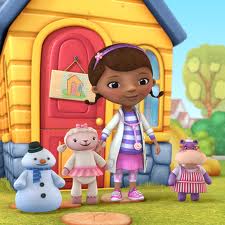 Below is the press release!:

The doctor is in -- "Doc McStuffins," TV's newest hit for kids age 2-7, has been ordered for a second season on both Disney Junior, the daily programming block that posted Disney Channel’s best fiscal second quarter ratings ever in the daypart, and the burgeoning 24 hour Disney Junior channel. The channel is available to Comcast, Time Warner Cable, Cablevision, Bright House Networks and Verizon subscribers and soon, via additional affiliates nationwide. The announcement was made today by Nancy Kanter, Senior Vice President, Original Programming and General Manager, Disney Junior Worldwide.

The animated series about Doc, a little girl who can talk to and heal stuffed animals and toys out of her playhouse clinic, is 2012 to-date's #1 cable series among Kids 2-5 and the #1 preschool cable TV series among Total Viewers and Women 18-49. Its March premiere is the #1 preschool series launch in cable TV history among Adults 18-49. "Doc McStuffins" joins Disney Junior's other hit series "Jake and the Never Land Pirates" and "Mickey Mouse Clubhouse" which accounted for the Top 3 preschool cable telecasts of the quarter among Women 18-49.

Based on parents feedback and retail demand, Disney will introduce "Doc McStuffins" books, apparel, party goods and role play toys, dolls and accessories, beginning this summer through early 2013, its quickest to market launch ever for a preschool property. A "Doc McStuffins" DVD will release on August 21.

Kanter said, "The series is resonating with boys and girls across our demo kids ages 2-7. And we've heard that the show, particularly as parents watch with their kids, has opened up a family dialogue about the importance of good health and compassion. Importantly, we are also hearing that the show is helping to take the worry out of going to the doctor that so many young children experience. We are delighted that kids will now be able to extend their love of Doc and her toy friends beyond the screen and encourage their inherent, nurturing play patterns."

Created and executive-produced by Humanitas Prize and Emmy Award-winning Chris Nee (writer on "Little Bill" and producer of "Deadliest Catch: Crab Fishing in Alaska") and directed by Emmy-winning Norton Virgien ("Rugrats"), "Doc McStuffins" is a production of Academy Award nominated Brown Bag Films in association with Disney Channel. The Hollywood Health & Society division of the USC Annenberg Norman Lear Center serves as the series' health and medical consultants, advising on basic health issues that are relevant to young kids and families. The series carries a TV-Y parental guideline.

Disney Junior reflects the emotional connection generations of consumers have to Disney storytelling and Disney characters, both classic and contemporary. It invites mom and dad to join their child in the Disney experience of magical, musical and heartfelt stories and characters, while incorporating specific learning and development themes designed for kids age 2-7. Disney Junior’s series blend Disney’s unparalleled storytelling and characters kids love deeply with learning, including early math, language skills, healthy eating and lifestyles, and social skills. Disney Junior launched in February 2011 with a daily programming block on Disney Channel. In its first year, Disney Junior posted the network's biggest yearly audience in the daypart in Total Viewers, Kids 2-5, Boys 2-5 and Women 18-49, increasing by double-digit margins among preschooler demographics over year-ago levels. On March 23, 2012 Disney Junior added a cable and satellite channel in the U.S. bringing the total number of channels to 30 worldwide.

Posted by Heather Kelly at 9:33 AM 0 comments 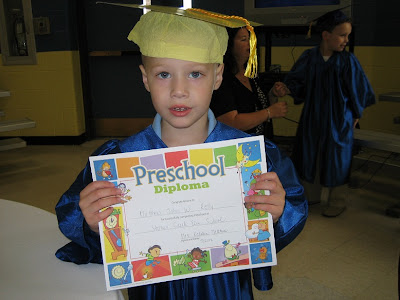 Chloe and her Build A Bear Bunny! 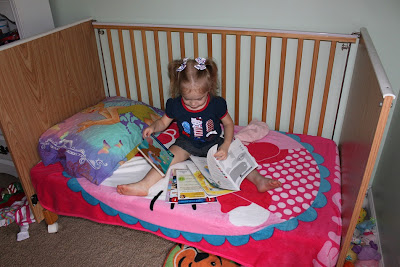 And... Chloe finally got the rail taken off of her crib!
Time for a big girl bed!
(No rail! She fell out 3 times, and hasn't fallen out since then!)

Coupon for a FREE box of Honey Bunches of Oats (5 winners) - U.S. - Hanging Off The Wire *RC

Eclos skincare Beauty products - U.S. - My Happily Ever After

I recently had a chance to review the Peace Dot Sign - Yellow Toddler Softy T-Shirt from Peace Love Mom. When given a choice, my daughter will chose to wear this t-shirt over any others. She really likes it, and it has stayed soft over the past month when washing and drying it! Peace Love Mom was created by Moms, for moms, children, and infants! They recently started selling Maternity Shirts! 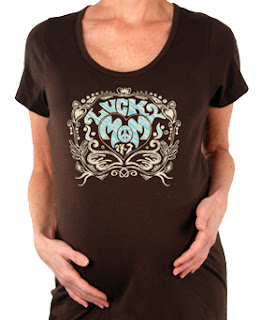 You can purchase one of these Cute t-shirts for your little boy or girl for $10.00! OR you can enter to Win one t-shirt, tank, or child's shirt of your choice (from a list that I will email you if you win) on my blog, Airplanes and Dragonflies! (Maternity shirts are not on the list of things you can choose to win, sorry.)

MANDATORY ENTRY:
1) Follow my blog on Google Friend Connect. (Leave a comment saying that you do, along with your GFC name and email address so I can contact you if you win.) (1 entry)
(*You MUST do This entry First, or your other entries will be deleted.)


Bonus Entries:
2) Go to Peace Love Mom and tell me what your favorite shirt(s) are! (1 entry)

11) Tweet about this Giveaway. (1 entry per day)
Tweet: Enter for a chance to Win a Shirt of your choice from @PeaceLoveMom! (U.S.) Ends 6/18 @matthewsmommy  http://tinyurl.com/7mcwf3j


*If you want even more entries sign up for my RSS feed, Networked Blogs, LIKE A Stitch in Time on Facebook, and/or Google Plus. (all located on my right sidebar.) (Each worth 1 entry/comment each).

Disclosure: I received one child's shirt for my review, no other compensation was exchanged or received.