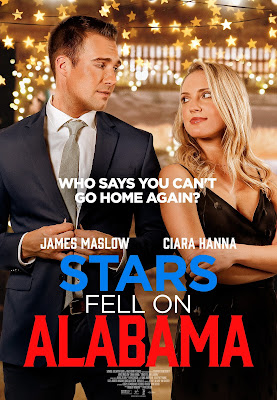 The romantic comedy STARS FELL ON ALABAMA, from distributor Samuel Goldwyn Films, will be released on-demand and digital on January 8, 2021. The film follows a successful Hollywood agent, Bryce, and a Hollywood actress, Madison, on the verge of becoming a true star, if she can just land the right role. Bryce moved from Alabama to California 15 years ago for college and to pursue his dreams, leaving his past behind. He does, however, keep up with a small circle of his best friends from high school. As Bryce prepares to return home for his 15 year high school reunion and realizes his high school classmates are judging him poorly because he isn’t married with children, he stretches the truth and tells them that Madison is his girlfriend, convincing her to pretend to be his girlfriend to escape questions from his friends.

Successful Hollywood agent Bryce Dixon is returning to Alabama for the first time in 15 years for his high school reunion. When he learns he's the only one of his friends who isn't married with children, he convinces his client, starlet Madison Belle, to pretend to be his girlfriend.  But he soon learns that success has different meanings, and romance may be closer than he thinks.

Cute movie! Great story line. There was a little left out, or cut out, or assumed I guess, when Bryce asked Madison about flying with him back to his hometown. The part of the movie where he asks her to go and pretend to be his girlfriend, was left out. It was just assumed. Then when they went to pick up their rental vehicle, she talked about his friends that he told her about. The movie is similar to a Hallmark movie, so those that love Hallmark movies, you'll love this! I'd say PG-13, to rated R, depends on your children, as there is some adult situations and two women wearing bras and underwear jumping into a swimming pool that they broke into a building to get into with Bryce and his friends. Also, a woman kisses Bryce when he's supposed to be dating Madison. Also, there's a lot of drinking in this film. Madison downs some beers with Bryce's friends. Every time they are out together some place, there's beer or cocktails. But overall, it's a great story with the ending you want!