Enter for a chance to Win a Fabulous July Ipsy Glam Bag! 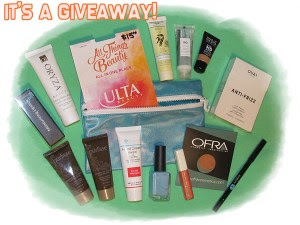 In the Ipsy Bag:
-VINTAGE BY JESSICA LIEBESKIND Sparkling Lip Gloss in Papaya – sheer and not sticky – maybe full-size

-JONTEBLU Waterproof Eyeliner and Kajal (what the heck is kajal?  Well, apparently it’s like kohl but with natural ingredients and not made from powders, if that helps explain it any). – full size

Posted by Heather Kelly at 7:45 AM 0 comments

Life of the Party - Movie Review!

Disclosure: I received one copy of "Life of the Party" on Blu-ray/DVD Combo pack from Warner Bros. in exchange for my post. The opinions below in my review are my own. No other compensation was exchanged or received.

Own Life of the Party on Blu-ray combo pack and DVD on August 7, or Own It Early on Now Digital HD! 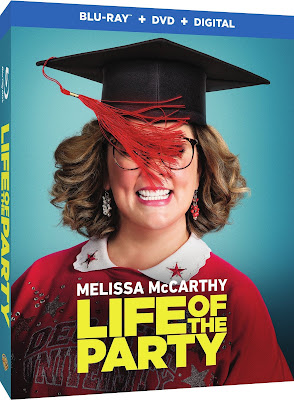 SYNOPSIS:
When her husband suddenly dumps her, longtime dedicated housewife Deanna (McCarthy) turns regret into reset by going back to college…landing in the same class and school as her daughter, who’s not entirely sold on the idea. Plunging headlong into the campus experience, the increasingly outspoken Deanna—now Dee Rock—embraces freedom, fun and frat boys on her own terms, finding her true self in a senior year no one ever expected.


My Review and Thoughts:
I love Melissa McCarthy! She's so beautiful, sweet and hilarious. I really enjoyed watching "Life of the Party." All three of my children are back in school, so being able to watch a movie in peace and quiet is always nice.

Deanna's husband wants a divorce from his wife of 26 years because he's into another woman. So she decides to go back to college. She only has one more year of college left in Archaeology! She gets to know her daughter and her daughter's friend better. She goes to the first meeting with her husband over dividing their assets and selling their house, and it makes her sad. Her daughter and her daughter's friends take her out to party, and she gets plastered and dances with a young college man, named Jack. Deanna has sex with Jack in the library! But breaks up with him because it's the right thing to do.

Then they attend an 80's party! Which was pretty cool for this 43 year old mama who would have loved to attend! Deanna starts a dance off with this stuck up girl at the college. She ends up winning! She also has a roommate that sleeps way too much! She also is still doing it with Jack. She's a great mom and friend, and she's also been flirting with one of her teachers, who is about Deanna's age. The rest of the movie is awesome! But I won't give anymore away then that! You will LOVE it!

Posted by Heather Kelly at 7:31 AM 0 comments 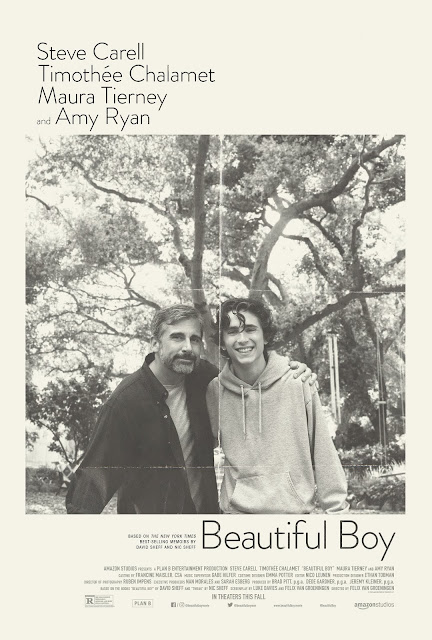 Based on the best-selling pair of memoirs from father and son David and Nic Sheff, Beautiful Boy chronicles the heartbreaking and inspiring experience of survival, relapse, and recovery in a family coping with addiction over many years.

Beautiful Boy chronicles the lives of David Sheff (Carell) and Nic Sheff (Chalamet), and the ups and downs they faced throughout young Nic’s battle with drug addiction. Based off both of the Sheff men’s memoirs, the story stands to tell an emotional tale around struggle, recovery and the power of family.

Posted by Heather Kelly at 8:09 AM 0 comments

Earn Free Gift Cards during the Back to School Team Challenge (U.S. only) 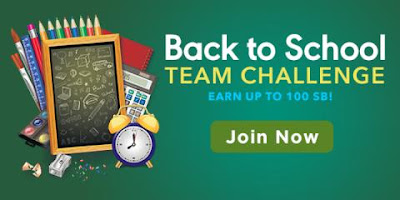 It's that time of the year again! Swagbucks is holding a Back to School Team Challenge to help you earn free gift cards! For those of you who don't know what Swagbucks is, it's a website where you can earn cash back on everyday tasks you do online like shopping, answering surveys, discovering deals, and watching videos. You can even earn for searching the web!

If you've never tried Swagbucks before because you didn't know where to begin, their Team Challenges are a great way to learn the ropes and earn points towards free gift cards and PayPal cash! The challenge runs from Monday, August 6th to Friday, August 10th.

All members who participate and contribute at least 600 points to their team’s total will receive a SB bonus in the form of a SB Swag Up Shop Bonus on their next gift card!

Not only that, but if you sign up under me this month and earn 300 SB before September 1st, you'll get a 300 SB bonus!

Posted by Heather Kelly at 7:11 AM 0 comments

Get 300 bonus SB when you sign up for Swagbucks in August! 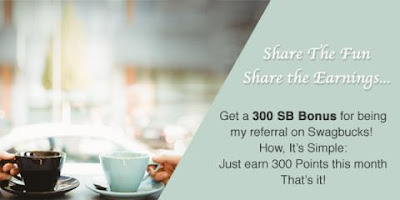 All throughout August you can earn large bonuses when sign up as my referral on Swagbucks. Swagbucks is a rewards site where you earn points (called SB) for things you're probably doing online already, like searching the web, watching videos, shopping, discovering deals, and taking surveys. Then you take those points and exchange them for gift cards to places like Amazon, Target, or PayPal cash.

3. That's it. It's super easy, and Swagbucks is for real. I use it myself, and I've earned so my Swagbucks that I have help paid for birthday presents, Christmas presents, school supplies and more!

Posted by Heather Kelly at 6:56 AM 0 comments 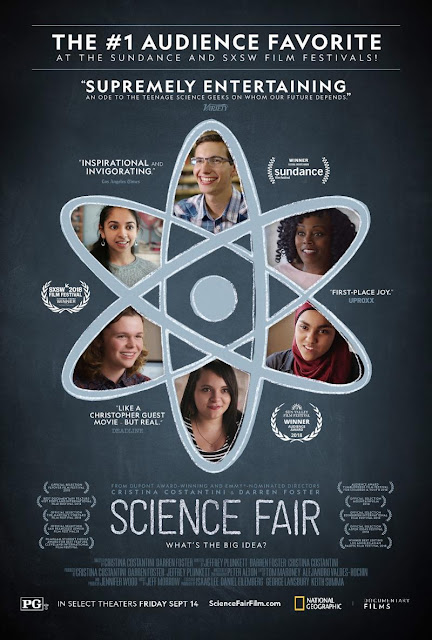 Synopsis:
Hailed by critics as "immensely likeable," "brilliant and quirky" and an "ode to the teenage science geeks on who our future depends," and winner of the audience award at Sundance and SXSW, National Geographic Documentary Films' SCIENCE FAIR follows nine high school students from around the globe as they navigate rivalries, setbacks and, of course, hormones, on their journey to compete at The International Science and Engineering Fair. As 1,700 of the smartest, quirkiest teens from 78 different countries face off, only one will be named Best in Fair. The film, from Fusion and Muck Media and directed by the DuPont Award-winning and Emmy-nominated documentary filmmaking team Cristina Costantini and Darren Foster, offers a front seat to the victories, defeats and motivations of an incredible group of young men and women who are on a path to change their lives, and the world, through science.

Among the subjects the documentary follows include:
Kashfia, one of the only Muslim girls at a massive high school in South Dakota, who finds an unlikely kinship with her school’s head football coach who doubles as her science fair coach;

Myllena and Gabriel, teenagers from a poor town in Brazil, who see winning the science fair as their families’ key to escaping poverty; and

Dr. McCalla, a black science research teacher from Long Island, who has transformed her class of young immigrants into one of the best science fair teams in the world.

This inspiring and exciting film won the first ever overall Festival Favorite Award at Sundance, the Festival Favorites Audience Award from SXSW and has been wowing audiences across the nation and in Europe.

SCIENCE FAIR opens in theaters beginning in New York on September 14, 2018; Los Angeles on September 21, 2018 and other cities following.

Directed by first time feature filmmakers Cristina Costantini (also a former science fair winner in her teens) and Darren Foster, SCIENCE FAIR  follows nine high school students from around the globe navigating rivalries, setbacks, and of course, hormones, on their journey to compete at the international science fair. Facing off against 1,700 of the smartest, quirkiest teens from 78 different countries, only one will be named Best in Fair.

Posted by Heather Kelly at 6:51 AM 0 comments 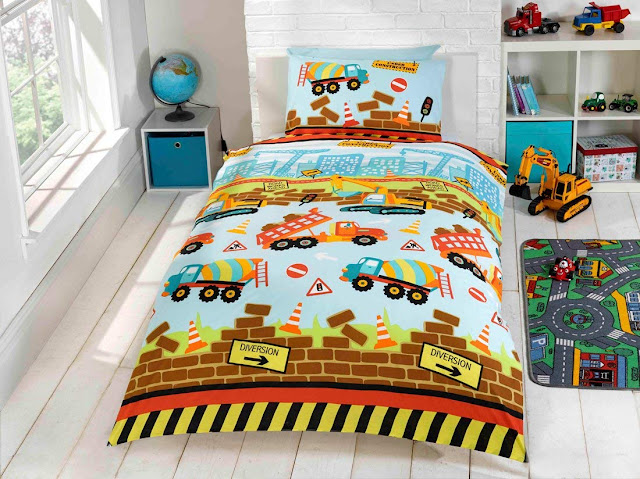 These are super great for little ones heading back to school! We all could use some New things when we head back to school besides school supplies, back packs, lunch boxes and clothing! Why not purchase some new sheets for your child or grandchild to celebrate their new school year! Christmas is coming up soon too! 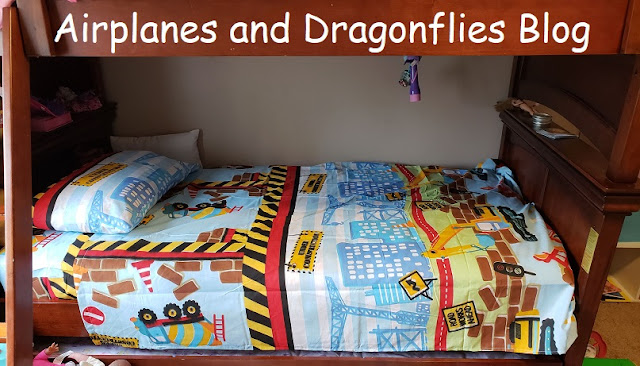 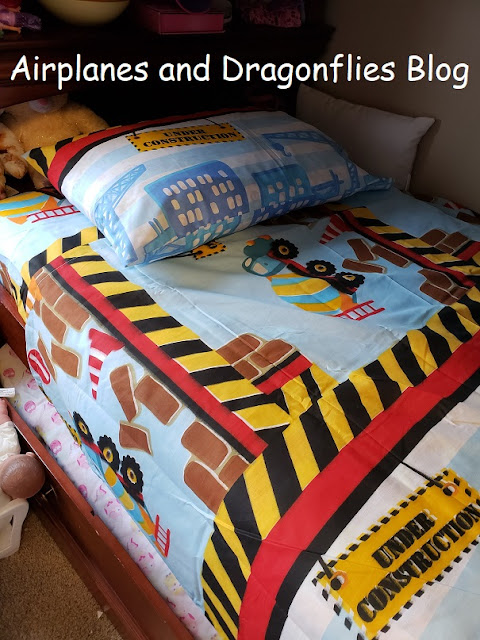 Purchase your Under Construction Bedding Collection, Twin 3-Piece Sheet Set on Amazon.com! Only $33.24 when you mark the 5% off coupon!


Disclosure: I received one Under Construction Twin, 3 piece bedding set in exchange for my post. No other compensation was exchanged or received.

Posted by Heather Kelly at 9:59 AM 0 comments

Stylized fleur de lys accent table from the Fontaine collection (ARV $250) and a small Brindille aluminum and glass lantern from The Mimosa Ridge Collection (ARV $70), both from Veridian Bay - All 50 U.S. States - Raise Your Garden

Disclosure: Warner Bros. Home Entertainment provided me with a free copy of the Blu-ray that I reviewed in this Blog Post. The opinions I share are my own. No other compensation was exchanged or received.

Aquaman must battle foes in the air, on land and in the depths of the Seven Seas, along with some help from The Justice League, to save the day in his latest animated adventure, LEGO® DC Comics Super Heroes: Aquaman - Rage of Atlantis. Produced by Warner Bros. Animation, DC Entertainment and the LEGO Group, the film will be distributed by Warner Bros. Home Entertainment on July 31, 2018 on Blu-ray Combo Pack ($24.98 SRP), DVD ($19.98 SRP) and Digital ($19.99 SRP). 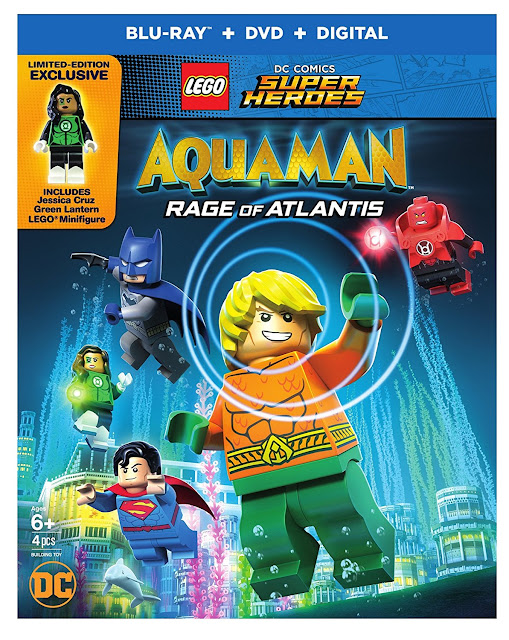 About the movie:
In LEGO DC Comics Super Heroes: Aquaman - Rage of Atlantis, the King of Atlantis must make some difficult decisions to ensure the future of his ocean realm. Under attack from Atrocitus and the Red Lanterns, Aquaman realizes he must relinquish his sovereignty and go on a journey to regain his confidence before returning to his rightful throne. Along the way, Aquaman reunites with the Justice League – including Batman, Superman, Wonder Woman and newest member Jessica Cruz/Green Lantern – to conquer Atlantis’ latest enemy and reemerge as the ruler of the Seven Seas. 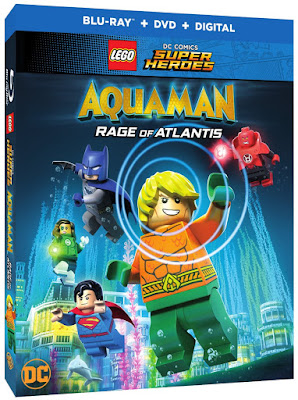 My Review and Thoughts:
Aquaman has a wife, Mirah, and a child, named Aqua Lad. All three of my children, ages 10, 9 and 6 sat through the whole thing. I like that a lot of the Lego movies are all intertwined in some way. The Red Lantern is causing havoc in Atlantis with his Red Lantern which is making the Atlantians only listen to Red Lantern and to Red Lantern's commands. Superman's powers are gone since he went through the Aqua gate. The Justice League runs into some robots that are non-destructible. The blow them apart, and the robots put themselves back together. Lego Aquaman movie is funny and entertaining! Really worth seeing!

Lego® DC Comics Super Heroes: Aquaman - Rage of Atlantis will be available to watch and purchase on July 31, 2018 on Blu-Ray, DVD & Digital!

Enter below using the Giveaway Tools form for a chance to Win your own copy of "Lego® DC Comics Super Heroes: Aquaman - Rage of Atlantis" on DVD!

Choice of any One book of MK McClintock's Books and a Surprise Gift from MK McClintock - U.S./CAN or e-copy (International) - Rockin' Book Reviews *RC