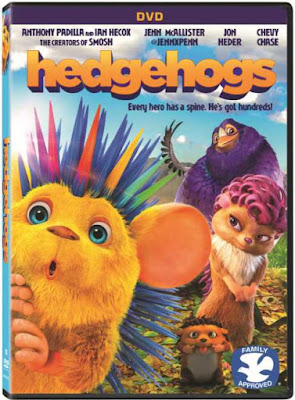 The animated family adventure HEDGEHOGS arrives on DVD and Digital February 2/13 from Lionsgate. Awarded the Dove Seal of Approval, HEDGEHOGS follows a mischievous hedgehog named Bobby (voiced by Anthony Padilla of Smosh) and a pigeon named Hubert on a wild journey.

Synopsis:
In this outrageous family adventure, Web superstars @jennxpenn (Jen McAllister) and the Smosh duo (Anthony Padilla and Ian Hecox) join forces with comedy legends Jon Heder (Napoleon Dynamite) and Chevy Chase (Caddyshack). The laughter begins as a mischievous hedgehog named Bobby leaves his wilderness home and joins Hubert, a featherbrained pigeon, on a wild, unpredictable journey. They make their way to the big city, where stressed-out humans are losing their minds. Bobby and Hubert must calm the nervous citizens by being their cute, cuddly selves.

Enter below using the Giveaway Tools form for a chance to Win one copy of "Hedgehogs" on DVD (2 Winners)!


Disclosure: I will receive one copy of the movie "Hedgehogs" on DVD from Lionsgate in exchange for my giveaway post. No other compensation was exchanged or received.

Couldn't find any! Enjoy your Saturday! 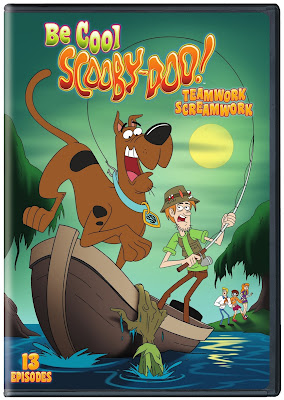 Hop inside the Mystery Machine and hit the road with Scooby-Doo and the gang, in Be Cool, Scooby-Doo! Season 1 Part 2 available in stores January 16, 2018 from Warner Bros. Home Entertainment (WBHE). This DVD release will feature another exciting 13 episodes from the hit, animated series from Warner Bros. Animation.

In Be Cool, Scooby-Doo! Season 1 Part 2, high school ends and summer vacation begins for the Scooby-Doo gang. Shaggy, Velma, Daphne, Fred and Scooby-Doo set out on a road trip in search of fun and adventure. Along the way, they share plenty of laughs and good times but that’s not all! Scooby-Doo and his pals tackle some of the biggest and most baffling mysteries they’ve ever come across.

As their excursion continues, the Mystery Inc. gang stop at several spooky destinations. The teens visit an old prison known as “The Vault,” which is haunted by the ghost of a man who once tried to escape from its confines. They board a flight on Air Gigantica, a plane that’s tormented by a gremlin. The hijinks continue in the bayous of New Orleans, where the gang encounters a swamp monster. Next on the route is a visit to a ski resort where Scooby-Doo and his pals confront a snow monster. These and several other escapades are featured on this fun-filled release. It’s a memorable journey the Mystery Inc. gang won’t soon forget and fans won’t want to miss!

“Viewers love this fresh, new version of Scooby-Doo! It’s a clever and highly entertaining twist on the original. The show’s cutting-edge animation appeals to kids while adults enjoy its wit and humor. Be Cool, Scooby-Doo! offers something for everyone,” said Mary Ellen Thomas, Vice President Family & Animation Marketing. She added, “We’re delighted to release more episodes of this fun, new series on DVD.”

Brady Rhymer and the Little Band That Could CD - U.S. - Reviewed By Mom *RC

None! Enjoy your day!