Disclosure: I received a copy of "Smallville: The Complete Series" on Blu-Ray from Warner Bros. Entertainment in exchange for my post. No other compensation was exchanged or received. The opinions below are mine and mine alone.

FOR THE FIRST TIME EVER ON BLU-RAY

Featuring All 218 Episodes from the Iconic Series 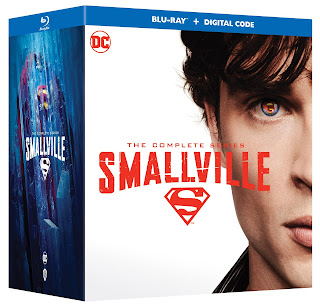 It’s been 20 years since Clark Kent first arrived in Kansas, and in honor of the 20th Anniversary of the remarkable series, Smallville: The Complete Series 20th Anniversary Edition will soar onto Blu-ray for the first time ever from Warner Bros. Home Entertainment on October 19, 2021. This set for the ultimate fan features all 218 episodes along with over 28 hours of bonus features from all 10 incredible seasons, plus Digital Copy (US Only). Smallville: The Complete Series 20th Anniversary Edition Blu-ray is priced to own at $179.99 SRP ($209.99 in Canada) and will also be available on DVD for $154.99 SRP ($184.99 in Canada).

The groundbreaking, Emmy®-winning 10-season hit that redefined the origins of the world’s greatest super hero is all here – from Krypton refugee Kal-El’s arrival on Earth through his tumultuous teen years to Clark Kent’s final steps toward embracing his destiny as the Man of Steel. Relive a decade’s worth of thrills in fantastic adventures full of action, heart and humor in abundance, all anchored by the marvelous performance of Tom Welling at its center. Savor again the series’ thoughtful and imaginative integration and reinvention of the iconic characters of DC lore. And let your spirits be lifted up, up and away.

MORE THAN 28 HOURS OF BONUS FEATURES:

Smallville: The Complete Series is currently available to own on Digital. Digital purchase allows consumers to instantly stream and download to watch anywhere and anytime on their favorite devices. Digital movies and TV shows are available from various digital retailers including Prime Video, Apple TV, Google Play, Vudu and others. 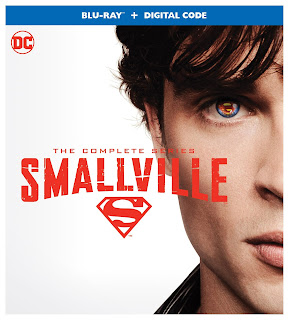 My Review and Thoughts: Twenty years ago, I was twenty six. I started watching Smallville back when I was around sixteen years old. I loved the show and it's storyline so much, that I never missed an episode! The relationship between Clark and his parents was neat to see. I especially liked that John Schneider was his father in this series. I have followed him since he was on The Dukes of Hazzard TV show. I can't wait to dig into the bonus features listed below!

Warner Bros. Home Entertainment (WBHE) brings together Warner Bros. Entertainment's physical and digital distribution businesses in order to maximize current and next-generation distribution scenarios. An industry leader since its inception, WBHE oversees the global distribution of content through packaged goods (Blu-ray Disc™ and DVD) and digital media in the form of electronic sell-through and video-on-demand via cable, satellite, online and mobile channels. WBHE distributes its product through third party retail partners and licensees.

DC, a WarnerMedia Company, creates iconic characters, enduring stories, and immersive experiences that inspire and entertain audiences of every generation around the world and is one of the world’s largest publishers of comics and graphic novels. As a creative division, DC is charged with strategically integrating its stories and characters across film, television, consumer products, home entertainment, interactive games, DC UNIVERSE INFINITE digital subscription service and community engagement portal. For more information visit dccomics.com and dcuniverseinfinite.com.

SUPERMAN and all related characters and elements are trademarks of and © DC.

Disclosure: I received a copy of "Superman & Lois: The Complete First Season" on Blu-Ray from Warner Bros. Entertainment in exchange for my post. No other compensation was exchanged or received. The opinions below are mine and mine alone.

NOW on Shelves on Blu-ray™ & DVD

Great storyline. Full of adventure. Great for teens like me who are into DC comics and DC characters like Superman. Superman and Lois living on his parents farm with kids! Awesome crossovers! 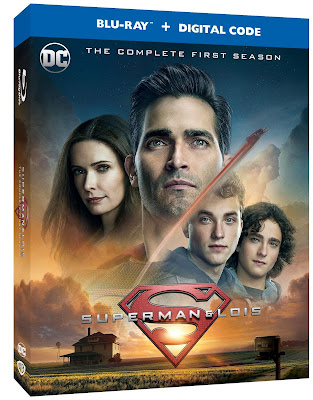 After years of facing super-villains, monsters, and alien invaders intent on wiping out the human race, one of the world’s greatest super heroes (Tyler Hoechlin) and comic books’ most famous journalist (Elizabeth Tulloch) come face to face with one of their greatest challenges ever – dealing with all the stress, pressures and complexities that come with being working parents!

- Superman and Lois Legacy of Hope

- The Perks of Not Being a Wallflower

- The Best of Smallville

- O Mother, Where Art Thou?

- Through the Valley of Death

Superman & Lois: The Complete First Season available to own on Digital. Digital purchase allows consumers to instantly stream and download all episodes to watch anywhere and anytime on their favorite devices. Digital movies and TV shows are available from various digital retailers including Amazon Video, iTunes, Google Play, Vudu and others. 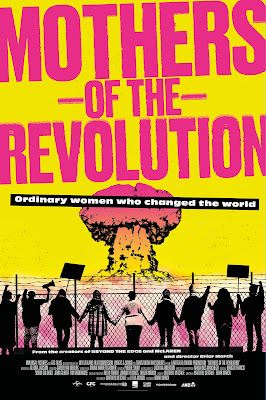 The all new feature documentary tells the story of the extraordinary women behind the Greenham Common Peace Camp. On September 5th, 1981 a group of women came together to change the world. These women marched from Wales to Berkshire to protest over nuclear weapons being kept at RAF Greenham Common. The Greenham Common Women’s Peace Camp that followed, challenged world leaders, altering the course of history and went on to inspire millions as the world’s first and biggest female-only demonstration, preceded only by the suffragettes.

A NEW TRAILER HAS BEEN RELEASED FOR THE UPCOMING INSPIRATIONAL DOCUMENTARY

MOTHERS OF THE REVOLUTION 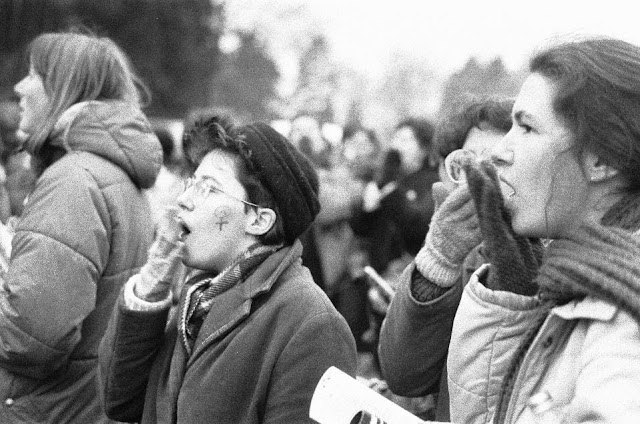 On September 5th, 1981 a group of women came together to change the world. These women marched from Wales to Berkshire to protest over nuclear weapons being kept at RAF Greenham Common. The Greenham Common Women’s Peace Camp that followed, challenged world leaders, altering the course of history and went on to inspire millions as the world’s first and biggest female-only demonstration, preceded only by the suffragettes.

MOTHERS OF THE REVOLUTION, a feature-length documentary that tells the story of the extraordinary women behind the Greenham Common Peace Camp, heads to the USA this Fall.

Narrated by Glenda Jackson and featuring interviews with key participants including Julie Christie and Rebecca Johnson, alongside archive footage from the Greenham Common Women’s Peace Camp, Mothers of the Revolution takes you through one of the longest protests in history, when between 1981 and 2000, thousands of women from around the world came together at Greenham Common to take a committed stand against nuclear proliferation.

Forty years ago, these everyday human beings began with that first step on their march to Greenham Common and became the heroes of a movement that changed the world.

Directed by: Briar March (Coffin Club, There Once Was An Island) and produced by prolific filmmaker Matthew Metcalfe (The Dead Lands, McLaren) and Leela Menon (Born Racer, Wayne).

Julie Christie – An Academy award-winning British actress and icon of the "Swinging Sixties", Julie Christie was a woman of Greenham Common, joining them for "Embrace the Base" and, later, going with an all-women delegation to Washington to take the peace movement’s message to the US.

Rose McGowan - An actress and activist named one of TIME's Silence Breakers, Rose McGowan appears in MOTHERS OF THE REVOLUTION.

Glenda Jackson (narrator) – An Academy-award winning actress and Labour MP for 23 years, during Glenda’s political career she was known for her energetic commitment to a number of causes - most notably social exclusion and transport. Since returning to acting in 2015, Glenda has gone on to win a Tony, a BAFTA and an International Emmy.

Briar March (director) - A documentarian and Fulbright scholar, her latest film, MOTHERS OF THE REVOLUTION honors the Greenham Common Women.

Lucy Lawless - New Zealand icon Lucy Lawless, most known for her role as "Xena the Warrior Princess", appears is MOTHERS OF THE REVOLUTION.

Rebecca Johnson – Greenham peace women and Noble Peace Prize Winner, Rebecca lived at the camp for 6+ years during which she was involved in all of the major actions and was often in media. In particular, Rebecca climbed the air traffic control tower and broke into the main operating room. After the INF treaty was signed, she attended a Pugwash conference where she witnessed Gorbechev give credit to the women at Greenham Common and their direct influence on him during his negotiations with Reagan. After Greenham, Rebecca went on to receive a Noble Peace Prize for her work with ICAN (International Campaign to Abolish Nuclear Weapons) establishing an international ban to rid Nuclear Weapons for good. Since Greenham, her fight against nuclear weapons has continued.

Chris Drake - After her first visit to Greenham her life was changed forever, never before had she felt more connected with her true self. Chris provides a deeply personal perspective of motherhood, identity, LGBTQ issues, imprisonment and feminism in the 80s, showing the personal sacrifices one mother makes for her children, but at a cost.

Karmen Thomas - Involved in the conception of original March/ makes a trip to Russia to meet with the Moscow Group for Trust and bravely challenges Soviet authorities. Returns to Russia a second time with a group of 30 women from Greenham. Visits Greenham regularly for all major actions. Karmen is the influencer, always thinking of the next move (be it starting a march with Ann Pettitt, or going to Russia to meet the peace women's counterparts).

Olga Medvedkov - Russian Trust Member who attends a meeting with Karmen, Ann, and Jean at the Official Peace Committee. 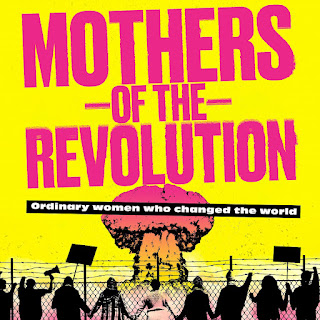 My Review and Thoughts: This is extremely powerful! Brilliant and wonderfully done! These women wanted to make a better world for their children and for their families. Many of the women were at the camp for months, or a few years. It took them not standing down to make the world change. Every person needs to see this film.

This rings true with what's going on in our world today. We need to start standing up for what we know is right with our kids, schools, and a certain jab. If we don't, we will soon lose our freedoms. Even if you have gotten the jab, you and your family will also suffer. More lock downs, more restrictions, forever wearing a mask. This is not okay, and this is not normal. We need to start staging protests, sit-ins, walk-outs, and more! And one day just won't cut it! It needs to be for days or weeks at a time, or more, for however long it takes to gain attention.

Labels: airplanes and dragonflies blog, Mothers of the Revolution movie, Women who changed the world 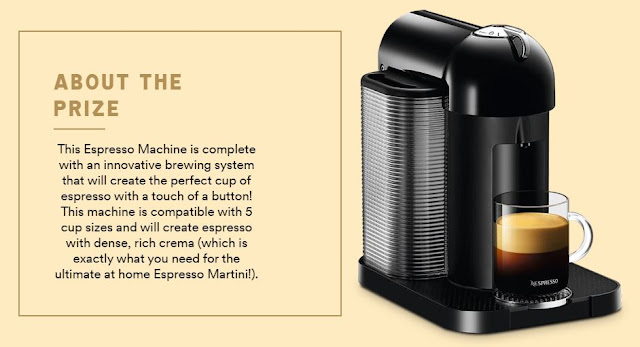