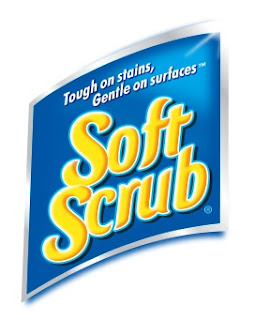 My family and I really enjoyed reviewing the Soft Scrub® 4-in-1 Toilet Care! My children thought it was neat! I enjoyed not having to clean one of the three toilets in our home! I will be purchasing three of these every month from now on! I cleaned the toilet in our half bathroom, the bathroom toilet that we all use the most in our home. And then I placed the Soft Scrub® 4-in-1 Toilet Care inside the rim of the toilet. It was so simple, quick, and easy! The toilet stayed clean for a whole month! 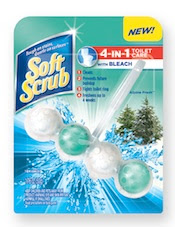 Click on the Special Offers section on the Soft Scrub website to print out some $1.00 off coupons for other Soft Scrub products!


Disclosure: The Soft Scrub brand provided me with a sample of Soft Scrub 4-in-1 Toilet Care in exchange for a product review.

Monsters University is NOW Showing at a Theater Near You! 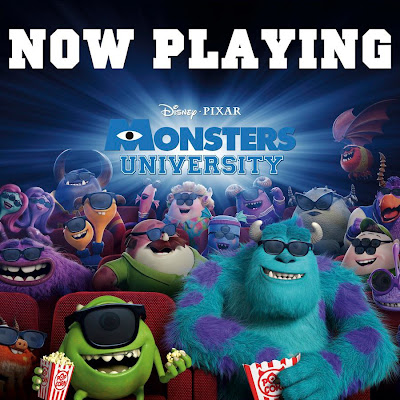 Monsters University is about Mike when he was a little monster and his dream to go to MU and to work at Monsters Inc. The story follows Mike as he arrives at college, checks into his dorm room, walks around the campus and learns about the college fraternitys, and more. I don't want to give too much information away. Even the information below doesn't give it away! I would recommend this movie for children ages five years of age and up, or for children who are able to sit through an entire movie without getting up or talking, like my 3 1/2 year old daughter did. As a few small parts in the movie scared her. The beginning of the movie in 3D was great! But to me, it wouldn't have mattered if it was in 3D or not.

Here is some more information about the movie:
Ever since college-bound Mike Wazowski (voice of Billy Crystal) was a little monster, he has dreamed of becoming a Scarer—and he knows better than anyone that the best Scarers come from Monsters University (MU). But during his first semester at MU, Mike’s plans are derailed when he crosses paths with hotshot James P. Sullivan, “Sulley” (voice of John Goodman), a natural-born Scarer. The pair’s out-of-control competitive spirit gets them both kicked out of the University’s elite Scare Program. To make matters worse, they realize they will have to work together, along with an odd bunch of misfit monsters, if they ever hope to make things right.

Screaming with laughter and oozing with heart, Disney•Pixar’s “Monsters University” is directed by Dan Scanlon (“Cars,” “Mater and the Ghostlight,” “Tracy”), produced by Kori Rae (“Up,” “The Incredibles,” “Monsters, Inc.”) and features music from Rock and Roll Hall of Fame inductee and award-winning composer Randy Newman (“Monsters, Inc.,” “Toy Story 3”). The film opens in U.S. theaters on June 21, 2013, and will be shown in 3D in select theaters.


Disclosure: My family and I went to a screening of Monsters University in exchange for my review post. No other compensation was exchanged or received.

Posted by Heather Kelly at 4:27 AM 1 comments

Pair of Shaune Bazner clip on earrings - U.S. - Find Products Made in the U.S.A. *RC

Full Box of Assorted You Bars - U.S. - Creative Me *RC

Bar of Berries 'n Cream Soap or a Bar of Shaving Soap from Rural Revolution - U.S. - Every Child is a Blessing *RC

One pair of DaddyScrubs in your choice of color and size - U.S. - At the Fence *RC

Spark of Amber Necklace - U.S. - Save Green Being Green *RC

Family 4-packs of tickets to the screening AND DESPICABLE ME 2 prize packs to go along with the tickets, each containing t-shirts, grocery bags, activity sheets, minion stress toys, and posters (5 winners) - U.S. - This Mama Loves *GT

Two NEW Behind the Scences Featuretees From The Lone Ranger! 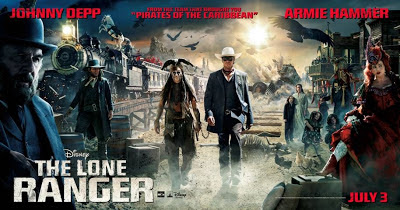 Two brand new and ACTION PACKED behind-the-scenes featurettes “The Craft” and “Hi Yo Silver” from THE LONE RANGER are now available.

You seriously need to stop everything and watch “The Craft” just to see Johnny Depp fall off his horse! Johnny Depp's Abs! Oh, and the most awesome Steam Engine (Train) scenes I've seen in a while!

THE LONE RANGER rides into theaters on July 3rd!


From producer Jerry Bruckheimer and director Gore Verbinski, the filmmaking team behind the blockbuster “Pirates of the Caribbean” franchise, comes Disney/Jerry Bruckheimer Films’ “The Lone Ranger,” a thrilling adventure infused with action and humor, in which the famed masked hero is brought to life through new eyes. Native American warrior Tonto (Johnny Depp) recounts the untold tales that transformed John Reid (Armie Hammer), a man of the law, into a legend of justice—taking the audience on a runaway train of epic surprises and humorous friction as the two unlikely heroes must learn to work together and fight against greed and corruption.

HALF Price SHAKES All Day at Sonic on Thursday, June 20th!!! 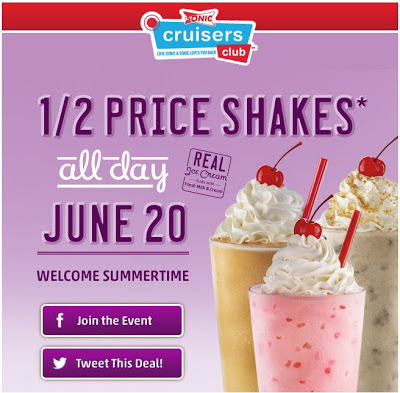 Go to your local Sonic and get your Milk Shake for 1/2 off the normal price today!!! My kids will LOVE this!

Get Photos From Your Cellphone to your Front Door With GrooveBook!

GrooveBook is a NEW app. (as seen on the Today show!)! You can try it out risk-free, using an exclusive promo code AIRPLANESANDGROOVE.

You can check it out at http://www.youtube.com/user/groovebookapp

GrooveBook can help YOU get photos quickly and easily from your phone to your door. GrooveBook is a FREE app that lets you choose up to 100 photos from your camera roll into a beautiful 4.5" x 6.5" photobook for FREE and mails it to you monthly.

Your photos are printed on glossy photo paper and perforated for easy removal. That means you can share, frame, decorate, scrapbook and more. All this for FREE and just $2.99 each month for shipping and processing!

Posted by Heather Kelly at 5:51 AM 0 comments

FREE Bikini or Brow/Lip Wax from Get Waxed - U.S. - Queen of Chaos *RC

Forgotten Skills of Cooking: The Time Honored Ways are the Best- Over 700 Recipes to Show You Why - U.S. - On Just A Couple of Acres *PT

Three Rolls of Smart-Fab - U.S. - Hanging Off The Wire *RC

The Adventures of Bailey A Night in Cowtown DVD (3 Winners) (@8pm CST) - U.S. - My Springfield Mommy

Board from Tailor Made Whiteboards - U.S. - The Simple Moms *RC