MOONSHOT - Movie! Available on Digital and DVD May 24! 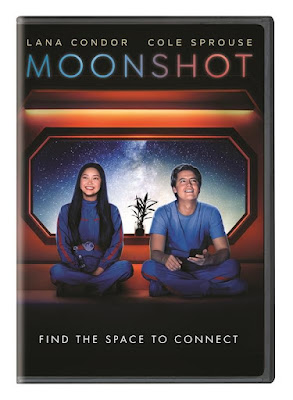 Warner Bros Home Entertainment announces the following HBO Max Original title coming to EST and DVD.  The film will be available on participating digital platforms wherever you buy or rent movies and on DVD on May 24th, 2022!
Synopsis:

A romantic comedy with a twist, Moonshot follows Walt and Sophie as they join forces in order to be reunited with their significant others, embarking upon a lively journey that winds up taking them both wildly and unexpectedly off course.

Rating: Rated PG-13 for some strong language and suggestive material.

Title: Earthlings and Martians: The Making of Moonshot

Description: Join us as we blast off to Mars in this behind the scenes look at​ the making of Moonshot

In Letter to FAA and International Civil Aviation Authorities, A Coalition Warns the Health of Vaccine Injured Pilots Must be Addressed to Restore Flight Safety

The Vaccine Safety Research Foundation (VSRF) issued unflinching support today for a letter sent to the Federal Aviation Administration and other civil aviation authorities that raises serious concerns over COVID policies and their effects on pilot health and flight safety.  The letter was sent by a global coalition of thousands of pilots representing 30 global airlines and the Global Covid Summit representing 17,000 doctors and scientists.

The letter is from pilots employed by the following airlines: American, Delta, United, Jet Blue, Frontier, Alaskan, and Southwest.

The letter reads: Pilots are trained to be careful analysts of their environment, recognizing risks, and actively mitigating. For many, their training and differential risk analysis led to concerns and negative conclusions regarding the compatibility of COVID-19 vaccination with health and flight safety. Not only did many pilots disagree with arbitrary requirements embodied in vaccination mandates, but they also saw risks in the unanswered questions and unjustified speed and pressure behind the vaccine rollouts. They lobbied their airlines and politicians, recommending caution and opposing mandates.

It continues, Principled professionals were forced out of aviation and the industry lost hundreds of thousands of hours of experience.

Pilots FAA and Other Civil Aviation

Safety within professional aviation has vastly improved over the past several decades. This is due in large part to a “Just Safety” culture founded upon open communication and self- disclosure of errors or negative safety trends. This requires active participation from all flight crew to be effective.

Pilots are trained to be careful analysts of their environment, recognizing risks and actively mitigating. For many, their training and differential risk analysis led to concerns and negative conclusions regarding the compatibility of COVID-19 vaccination with health and flight safety. Not only did many pilots disagree with arbitrary requirements embodied in vaccination mandates, but they also saw risks in the unanswered questions and unjustified speed and pressure behind the vaccine rollouts. They lobbied their airlines and politicians, recommending caution and opposing mandates.

Many pilots also sought guidance from civil aviation regulators. These regulators are ultimately responsible for the safe and secure transport of citizens, yet most if not all actively ignored their own safety recommendations against unproven, unapproved drug use or medical trials for flight crews. Transport Canada, for instance, simply removed this online guidance the week following numerous pointed, written questions on the same.

Once airlines mandated vaccination, many pilots steadfastly refused based on risk and were subsequently put on unpaid leave or outright terminated. Principled professionals were forced out of aviation and the industry lost hundreds of thousands of hours of experience. Now, the global airline industry is heading into a dire staffing crisis. Thousands of other pilots were coerced into vaccination to provide for their families. This has taken a toll on their mental health.

As sobering as all of this is, it merely set the stage for what we are now witnessing: a landscape which should greatly concern airlines and the travelling public. The undersigned pilot advocacy groups, scientists and doctors are hearing daily from vaccine-injured airline pilots. These harms include cardiovascular issues, blood clots, neurological and auditory issues, to name just a few.

Many of our pilots have lost medical certification to fly and may not recover the same. Others are continuing to pilot aircraft while carrying symptoms that should be declared and investigated, creating a human factors hazard of unprecedented breadth. The very foundation of our just safety culture - non-punitive reporting - no longer exists. Pilots have suffered and are suffering medical issues that at least correlate to receiving COVID-19 vaccinations. Their spectrum of symptoms is broad, ranging up to death. Pilots who report their injury face possible loss of licensing, income, and career while receiving little to no support from their unions, and a prosecutorial invective from employing airlines. Many of these airlines believe they indemnified themselves from liability, claiming this in the very same documents that forced “no jab, no job” mandates on their employees.

Worse, there appears to be no evidence of aviation regulators, airlines or unions having performed any of their own due diligence into COVID-19 vaccines and the impact on pilot health or performance. This is at complete odds with existing aviation medical standards. Questions exist around competence and possible negligence.

Failure to address this potential medical watershed will make the airlines and unions complicit in a culture shift that has rocked the aviation mantra of “safety first, always.” The airlines and unions represented have been encouraged to assist and warned of dire repercussions, repeatedly, by many of the signatories below. To date there has been little meaningful action, and in many cases nothing but stone-walling and silence.

There is a saying in aviation, “If there’s doubt, there is no doubt.” There is increasing doubt about COVID-19 vaccinations. There should therefore be no further doubt in aviation. Safety must return to the fore.

While not an exhaustive list, the airlines below have pilots on staff who are vaccine injured, and with whom our pilot advocacy groups are in contact:

Civil aviation authorities such as the Federal Aviation Administration, Transport Canada, UK Civil Aviation Authority, the European Union Aviation Safety Agency and Australia’s Civil Aviation Safety Authority must begin fulfilling their regulatory obligations. The crisis in pilot health must be publicly addressed by airlines and representing unions to restore flight safety to what we once knew. The undersigned alliance of aviation and medical professionals represent thousands of pilots at over 30 global airlines, along with over 17,000 physicians and medical scientists, worldwide. We call for the following: