Over 250 Entries:
A New Spin on Drunkard’s Path and template set for making a quilt - U.S. - Sew Sweatness *RC

Refresh: Devotional for Parents of Children with Special Needs - book - U.S. - Singing through he rain *RC

Posted by Heather Kelly at 8:51 AM 0 comments 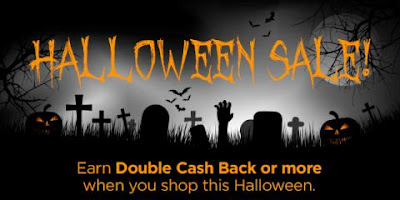 Get in the Halloween spirit with Swagbucks! Stock up on Halloween candy and decorations, and get those costumes ready for the big day!

Swagbucks, an online rewards program that gives you cash back for completing online activities such a shopping online, is running a great Halloween on their site now through the end of the month.

Earn Double Cash Back or more when you shop the Halloween Sale at your favorite stores including:


Sign Up for Swagbucks Today and start earning gift cards to use on purchases for the Holidays!

Posted by Heather Kelly at 7:26 AM 0 comments 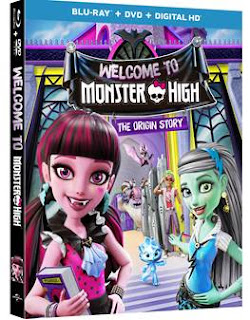 Synopsis:
Monsters once lived in hiding—even from each other—because they were afraid they would be in danger if humans knew they existed. But Draculaura, the daughter of Dracula, along with her best ghoulfriends, dreamt of a school where everyone was welcome and accepted for who they are. Determined to make their dream come true, the ghouls travel the world on an epic adventure to recruit new students. But even in this amazing place, there’s drama: a villainess zombie is spreading trouble rather than friendship, and every student must live with the fear that their secret will be revealed. Now the ghouls must save their school so that every monster has a place where they belong and their uniqueness is celebrated!

Enter below for a chance to Win a copy of "Welcome to Monster High: The Origin Story" DVD/Blu-Ray/Digital Combo Pack! Giveaway ends 10/16/16. Open to residents of the main 48 continental United States only, 18 years of age or older. No P.O. Boxes, sorry.

Disclosure: I am going to receive one copy of Welcome to Monster High: The Origin Story DVD/Blu-Ray Combo Pack in exchange for my giveaway post. Sponsor is responsible for mailing out your prizes. Airplanes and Dragonflies blog and Heather Kelly are not responsible for mailing out your prizes. If you don't receive your prize 2 weeks after this giveaway is over, it is your responsibility to email me back after the two weeks is up, so that I can email the sponsor. If you haven't received your prize by 12/30/2016, then you probably won't receive it or it got lost in the mail.

PIRATES OF THE CARIBBEAN: DEAD MEN TELL NO TALES opens in theaters May 2017 in 3D, RealD 3D and IMAX 3D! 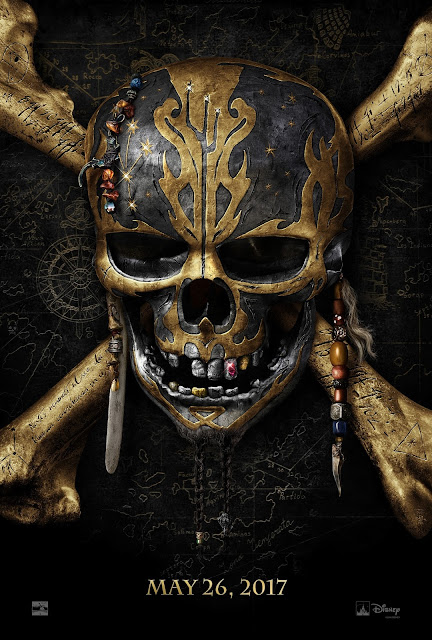 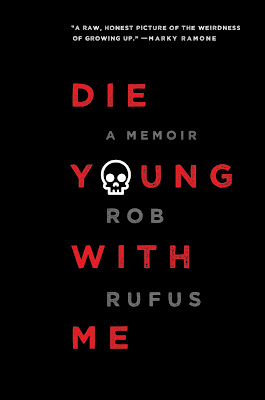 Die Young With Me: A Memoir by Tennessee-based author/musician Rob Rufus, which Kirkus calls "a resounding affirmation of how music can lift one's spirits beyond gray skies and bad news…a valuable contribution to the literature of healing and recovery.”

About the Book:
In the tradition of John Green’s The Fault in Our Stars and Me and Earl and the Dying Girl comes the incredibly moving true story of a teenager diagnosed with cancer and how music was the one thing that helped him get through his darkest days.

Punk’s not dead in rural West Virginia. In fact, it blares constantly from the basement of Rob and Nat Rufus—identical twin brothers with spiked hair, black leather jackets, and the most kick-ass record collection in Appalachia. To them, school (and pretty much everything else) sucks. But what can you expect when you’re the only punks in town?

When the brothers start their own band, their lives begin to change: they meet friends, they attract girls, they finally get invited to join a national tour and get out of their rat box little town.

But their plans are cut short when Rob is diagnosed with a rare form of cancer that has already progressed to Stage Four. Not only are his dreams of punk rock stardom completely shredded, there is a very real threat that this is one battle that can’t be won.

While Rob suffers through nightmarish treatments and debilitating surgery, Nat continues on their band’s road to success alone. But as Rob’s life diverges from his brother’s, he learns to find strength within himself and through his music. Die Young With Me is a raw, honest account of a brave teen’s fight with cancer and the many ways music helped him cope through his recovery. 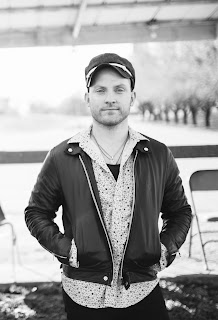 About the Author:
Rob Rufus is a musician and writer living in Nashville. His band, Blacklist Royals, has released two full-length albums and played in sixteen countries over the past five years. Rob has written articles for Modern Drummer, Amp Magazine, Digital Tour Bus, and many music sites. Rob also works closely with the cancer community, including the Lance Armstrong Foundation, Stupid Cancer Podcast (the largest advocacy/support organization worldwide for teens with cancer), and Make-A-Wish Foundation.

Enter below using the Giveaway Tools form for a chance to Win a copy of "Die Young With Me: A Memoir" book! Giveaway ends 10/16/16! Giveaway is open to residents in All 50 U.S. States and Canada.

Disclosure: I didn't receive any compensation in any way, shape or form in exchange for this post. I simply did it out of the kindness of my own heart, because it sounds like a great book and because the author lives in Tennessee! 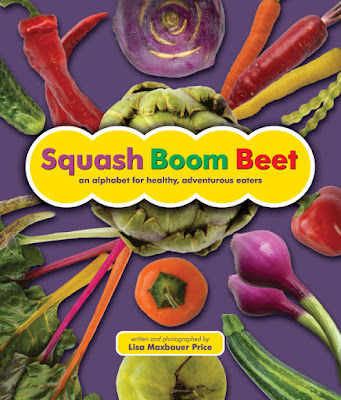 Tasting new vegetables can be an exciting adventure, especially when trying foods like dragon tongue beans, dinosaur kale, fairy tale eggplant and candy cane beets. Journey from A to Z and enjoy beautiful photography of exciting farm foods--everything from awesome Asparagus to green tiger Zucchini! Kids will love this new book all about fun foods, and parents will love how it inspires and educates their little ones to be brave, healthy eaters!

About the Author:
Nutrition journalist Lisa Maxbauer Price is the author and photographer behind the book Squash Boom Beet. She spent 10 years in New York City working as a magazine editor before moving to the Midwest. She currently contributes to multiple national publications, writing on health, nutrition and parenting. She is a contributor at First for Women magazine and has blogged for The New York Times. She currently lives in Northern Michigan with her husband and three sons.

My Review:
I took this book while doing childcare for my daughter's dance school and the kids thought it was a neat book and super helpful to teach them and other children about healthy eating and some vegetables that they had never even heard of before. My four year old daughter likes this book, and it's fun teaching her the ABC's along with teaching her about healthy food and veggies. The photographs are amazing and very well done.

Squash Boom Beet should be available for purchase at your local book store, or you can purchase a copy online!

Enter below to Win your own copy of "Squash Boom Beet: An Alphabet for Healthy, Adventurous Eaters," a Squash Boom Beet Bookmark, and a few Coloring Pages! Giveaway is open to residents who live in the main 48 continental United States, 18 years or older. No P.O. Boxes, sorry.


Disclosure: I received a copy of Squash Boom Beet from Blue Bay Books in exchange for my post. No other compensation was exchanged or received. 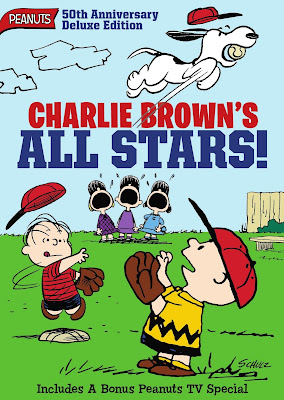 THE EMMY®-NOMINATED PEANUTS TELEVISION SPECIAL IS AVAILABLE ON DVD IN A NEW REMASTERED EDITION ON OCTOBER 4, 2016

It’s the golden anniversary of Charlie Brown’s All Stars, the beloved Peanuts television special, which earned two Primetime Emmy® Award nominations. To mark the occasion, Warner Bros. Home Entertainment (WBHE) will release this delightful story in a deluxe, 50th anniversary edition, completely remastered in beautiful high definition on October 4, 2016. Charlie Brown’s All Stars follows the bittersweet story of Charlie Brown, who won’t give up on trying to bring his baseball team to victory, in spite of facing great criticism from the team’s players. This release will be timed to the culmination of the World Series.

In Charlie Brown’s All Stars, it’s summer and baseball season gets underway. Charlie Brown is put in charge of managing the Peanuts’ baseball team again, which in the past, has only suffered crushing defeat from its opponents. The disillusioned players blame Charlie Brown for the team’s past poor performance. When a sponsor offers Charlie Brown real baseball uniforms and a chance to be part of an actual league, he is thrilled. He believes the new uniforms and acceptance into a real league will motivate his players. His excitement however, soon turns into disappointment when he learns that if he accepts the offer, Snoopy, Lucy, Patty, Violet and Frieda will be kicked off the team because the league’s policy prevents girls and dogs from playing. Poor Charlie Brown, not only is he criticized by his teammates for being a bad manager, he’s now faced with a difficult moral dilemma. Should he accept the uniforms?

“Charlie Brown’s All Stars is a classic. Viewers of all ages will enjoy this endearing story,” said Mary Ellen Thomas, Vice President Family & Animation Marketing. She added, “We’re pleased to celebrate 50 years of this heartwarming special with this new release. For any Peanuts fan, this newly remastered edition is a must-have for their collection.”


We love Charlie Brown and Snoopy! I grew up in southern California where Knott's Berry Farm is located where The Peanuts Gang hangs out, is super popular, and then even created a Camp Snoopy area inside the park with rides just for children, and some were created that adults can go on too! I also grew up watching Charlie Brown cartoons on TV and on VHS with my cousins when we were little. Now I get to share Charlie Brown and the Peanuts gang with my children, and I hope that they share them with their children too someday.

Enter below using the Giveaway Tools form for a chance to Win your own copy of Charlie Brown’s All Stars 50th Anniversary Deluxe Edition on DVD, 2 Winners! Giveaway is open to residents who live in the main continental 48 U.S. States only, 18 years of age or older. No P.O. Boxes, sorry. Giveaway ends 10/16/2016.

Personalized book of your choice from I See Me Books - U.S. - The Style Files *RC