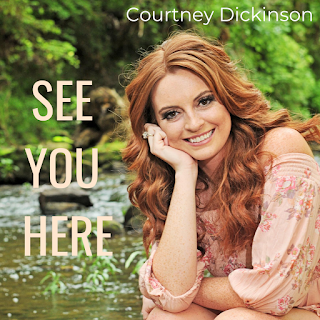 Following two Music Row Top 40 singles, Courtney Dickinson only further builds upon her impressive catalog with her new single, “See You Here”. An emotional and mid-tempo pop-country ballad, “See You Here” seamlessly fits into any fall country playlist. Its vivid lyrics of bittersweet nostalgia and hooky, melodic chorus grab the attention of listeners of any age, and leave them with the relatable message that even after profound losses, memories have the power to transcend time and shape lives far in the future. Listen to “See You Here”, here.
"'See You Here' is a song that holds a lot of meaning to me," said Dickinson. "I was blessed to have extremely close relationships with my grandparents. Last year was a big year for me as I graduated college and got married. More than anything I wished my grandparents could have been there with me physically, but I could feel and see them in every moment. These experiences led me to write this song to relate to anyone who has dealt with the loss of a close loved one."
While Dickinson may be a relative newcomer to some, she’s been making a name for herself for years, and garnering attention from some of the industries top professionals. Heath Shelby, KWCK Program Director and Music Director of Crain Media, described her as “One of the brightest rising stars in country music, Courtney Dickinson is that lightning-in-a-bottle, once-in-a-lifetime talent that reassures you that the future of country music is in very good hands.” You can follow along with Courtney on Facebook, Twitter and Instagram.
About Courtney Dickinson:
A rarity having a clear vision of her goals early in life, country artist Courtney Dickinson paved her own, unconventional path from the start. Going as far as dropping the stereotypical high school and college lifestyle. She attended online classes in order to spend more time honing her skills, it’s obvious her tenacity, work ethic and evident talent set Dickinson apart from others. From her first time on stage at five years old with the Little General Cloggers dance group at the Grand Ole Opry, Dickinson knew she was destined for the stage. Later, Dickinson entered a contest with Atlanta’s Kicks 101.5 and won a duet performance with Billy Ray Cyrus during the station’s Lunchtime Live event, singing Cyrus’ “Ready, Set, Don’t Go” for listeners. As she continued to fine-tune her sound, Dickinson tested it out with performances at Nashville’s Bluebird Cafe, Hard Rock Battle of the Bands, the Country Music Association’s CMA Music Festival, Belk’s Southern Original Showcase, pre-show parties for Sugarland, Big & Rich and Cowboy Troy, the NCAA St. Patrick’s Day Party and the National Anthem and pre-show for the Atlanta Braves. Along with these performances she began to learn the craft of songwriting and began co-writing and recording new material. She released “So Over the Rainbow” and watched as it exploded onto the Music Row Chart. In a record number of weeks “So Over the Rainbow” climbed into the Top 40. She followed up with her 2nd single “Freedom,” which also landed in the Top 40. Dickinson has set herself up for success as she releases more new music this year. For more information visit www.courtneydickinson.com.